Back Seat Barrier by Kurgo

I was asked to review the back seat barrier
by Kurgo
http://www.dogfencediy.com/reviews/dog-fence-barrier/.

This material wall was designed to keep overly affectionate dogs from jumping into a driver's lap and causing a horrific accident. Does it work? Actually it depends on the dog.

We first tried this product with our two dogs on a trip to the dog park. The installation was reported to be easy, and maybe would have been had we not let the directions slip out of the box unnoticed.

"Where are the directions?" my husband asked.

"We didn't get any," I said, only to find the slip of paper on the floor after we struggled to install it. Recommendation number one, print the directions on the box. 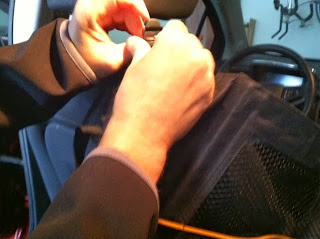 After we installed the dog barrier, it didn't quite hold as tightly as the one in the photo, but it provided a good barrier for Honey Bear and Millie. Although Millie typically does not venture into the front seat, Honey Bear likes to. With the dog fence, she could lean her head over for a pat but not become an accident provoking nuisance. So on a long trip with a dog like Honey Bear, I would strongly recommend this product; however, this is not a good idea for large, active puppies like my grand dog Mowgli. 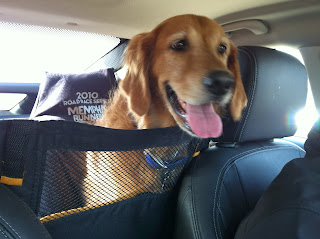 Since Judy had a long drive ahead of her from Memphis to Ann Arbor, Michigan, we gave her the dog gate to keep her little trouble maker in the backseat. The traveling crew waited until Nashville to install it, since they had to drop off Daniel. Next, Daniel struggled with installing the dog gate, even though he had the directions available and is of the twenty-something generation, meaning he typically doesn't have trouble installing anything.

The gate was not as wonderful for Mowgli. Being the active puppy he is, he wouldn't take "No" for an answer and continually jumped on it and tried to get over the gate, creating a dangerous situation for the dog. Judy worried he'd be injured with his attempts to hop over it, so she took it down.

In conclusion, this could be a great product for a mature large dog on a long trip or a small dog, but I wouldn't recommend it for large puppies. 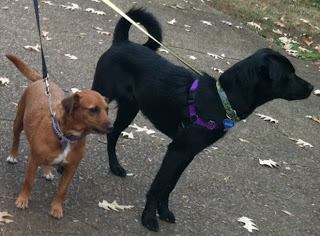 Check it out yourself and see if it's right for your dog.

I think this would be great for my female boxer. However, my male is a big baby and doesn't take no for an answer either!

Great idea - for big dogs. It wouldn't stop my little jumper for a second, though.

I have a Jack Russell Mix that I have in mind - we also have a Chihuahua and a Corgi Mix. Our Corgi Mix is good in the car but might have to look into this for the other two :)

We don't have a dog, and our girls are already teens, so we have no need for this.

I love your review style, honest and by pointing out the negatives too, it's really believable. If I had a mature dog, I would certainly be getting one of these.

They always make those things look easier than they really are.

It's a cool concept! I like your honest review on it. My MIL has a dog seat for her little dog which is ridiculous (times ten) but cute. ;)

Our 50# foxhound, Max, insists on sitting on my lap during all trips in the car. Made the mistake of cuddling him all the way home from the shelter 4.5 years ago when he was a baby. He still thinks he is a baby :)

I like the idea of this because we have a dog that drools everywhere in the car and this might catch some of that drool istead of my arm!

Stopping by from the Thursday Blog Hop.