Half Off Sales on Teachers Pay Teachers & Music

I have teamed up with a group of top notch sellers to bring you two days of half price sales. This is a special and rare event with quality resources up for grabs. I even bought from another seller this morning.

I am offering TWO Logic Puzzle Packs at half price until early Wednesday morning. For half off the original price you can now buy: 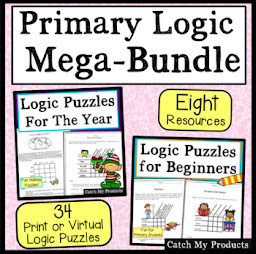 Primary Logic Bundle
This resource contains sixty pages of print or digital worksheets for first and second grade learners. This is a great resource for gifted and talented students or early finishers who need a challenge. It's on sale for 50% off it's value of $19.57. You can do the math or I'll tell you. That's  just $9.79, before the sale ends. 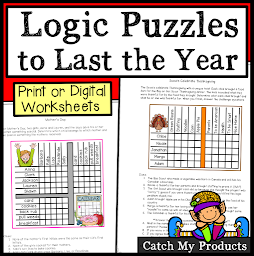 Logic Problems for the Year
Sometimes searching for the right seasonal challenge can be difficult and time consuming. This product contains twelve logic puzzles plus an accountable talk bonus passage for just $4.13. That's a steal, but if you want it, you must stop by my store today or tomorrow before the sale ends. 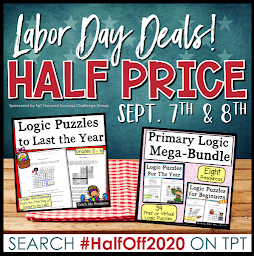 Since this is Labor Day, here are some fitting tunes for Monday Music Moves Me.
First up is a great tune from 1966, "Working in A Coal Mine," by Lee Dorsey.
Next up, here is another tune for the worker. This one is more recent because it's from the 1975 movie, "Car Wash" and features Rose Royce.
This last one is for all of the teachers dealing with a new school year, either with a lot of ppe concerns or teaching remotely. Here's a little encouragement from Devo with "Whip It."
Posted by Catch My Words at 10:17 AM 6 comments:

About three weeks ago, my tube of toothpaste reached the point where I could no longer squeeze anything out of the uncapped top, so I took a scissors to the bottom and am still using it. No. I'm not just ignoring my teeth by covering them with a mask or staying home. I actually do brush at least twice a day. I do, however, follow a dental hygienist's advice by only using the tip of a pinky's worth. We've all seen those toothpaste commercials where they spread the paste across the entire brush and give it a cute little swirl at the top. That's what they want us to do. Waste it so we have to go out and buy more.

Brushing is important but flossing is even more so. We leave our floss picks in the den on a table near the couch. Every night when we watch the news, we pass the bag of flossers. I've noticed that if I skip just one night of flossing, the pick stinks after being in my mouth, so I try to do this every night. I've heard that the bacteria between the teeth are like ants building an ant hill. Flossing kicks them to the ground, so they must start over again the next day.

So just think, if you buy toothpaste less often, you have the funds to settle your tooth fairy debt. Back when my youngest was a teeth losing believer, her older siblings got in on the act. They would type notes to her along with the money, which of course did not come from their pockets! They even gave Erica's tooth fairy a name. At the time, she was good friends with a girl in my class and told her all about the tooth fairy's name. So, her mom called me to find out what the name is so that she too could partake in the game.

Since my son had named the tooth fairy, I hemmed and hawed before revealing this most embarrassing tidbit. Under bated breath I told her, "Tina Fartinkle." How's that for a name to tell to a child in your class' mother? Luckily, she too had an older son and understood. We both laughed.

If you like logic about teeth, I have a medical pack that has one of those in it. 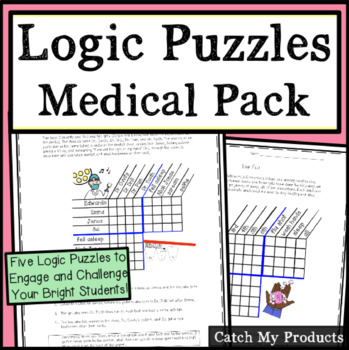 https://www.teacherspayteachers.com/Product/Logic-Puzzles-5th-Grade-Worksheets-in-Printable-or-Virtual-Documents-3677131
Now that TpT has designed the Google overlay for pdf. files, you can access this online to share with the kids. Enjoy!