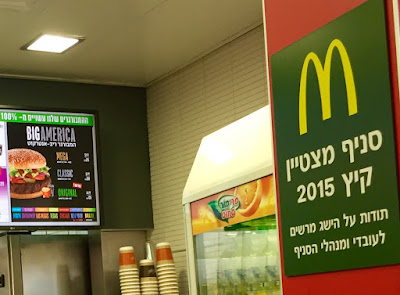 I love this Michael Jackson tune that was recorded in 1991 but never made it onto his Dangerous album. Snippets of the song leaked onto the internet on 2005 with the full song posted in 2008. I don't know why he never released this song, but he had written hundreds of songs that were never released. 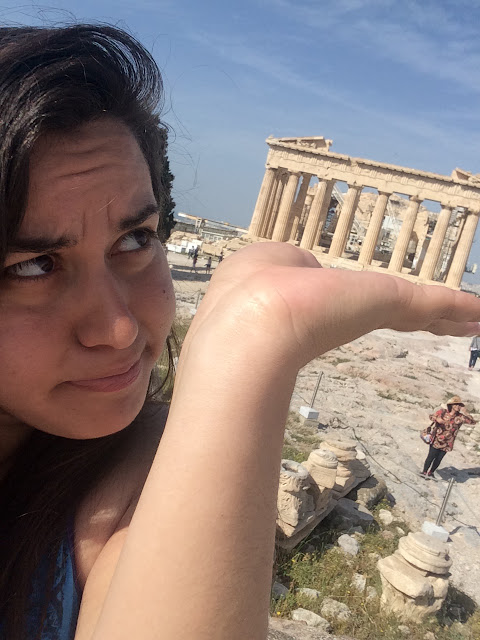 This is a fun one!

I think my daughter is trying to kill me. On our first full day in Israel, she took us on a little "hike" down and up through the Arbel. First, we descended straight down the side of a mountain onto the trail by kung fu gripping onto little metal bars and ropes coming out of the side of a cliff. It kinda reminded 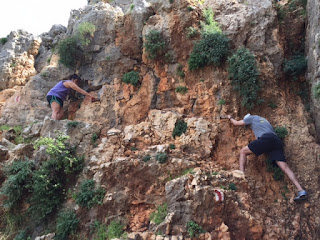 me of the ropes coarse in Silver Spring, Maryland, except we weren't wearing the multiple harnesses to keep us alive should our footing go off or we were to pass out from a fear of heights.

Upon reaching the trail with legs a shaking and throat raw from repeated fear screams, we began our hike along the trail. To keep my life more threatened, we played a little game of My Cow. The first one to see a cow says, "My cow." One would think this an odd little game to play on a mountain, but no, the cows were everywhere. Since cows won't go down stairs, I guess they were stuck there, forever. Unless, of course, they were to fall and become "tenderized" steak.

Every time I'd look for cows, I'd stumble over rocks, so I thought it best to watch the trail. Later, in the car, I began to win the game by claiming cattle by looking out the window. I would have won, too, had Daniel told me the cemetery rule. Yep. When he saw a grave yard, he proudly announced, "All your cows are dead!" But I digress.

It's a well known fact that what goes down, must go up. This means, we had to 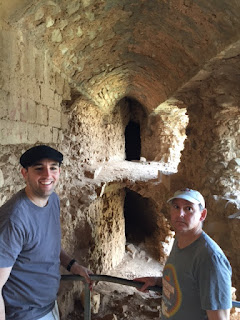 climb back up the mountain at the end of our little hike. I climbed on all fours with multiple stops to catch my breath among my twenty-something kids, our young tour guide, and Superman. Yes. I'm married to an athlete. I am proud to say that my husband and I broke the record for the oldest people the guide had taken on this trek.

Since Israel is filled with history, our hike contained multiple little caves where the Maccabbis hid to save their lives. You know the holiday--they tried to kill us; we survived; let's eat.


After we left Mount Arbel, we put skirts on over our shorts and headed to the religious part of town. We saw beautiful 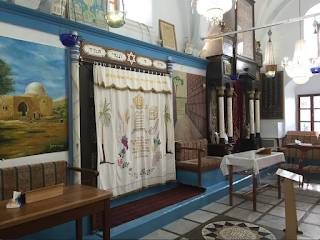 synagogues, as well as the art galleries in Tzfat. I might have liked to have bought something in the candle factory, but we were rushed through the shopping area. Wonder if that was planned!


We also saw a man hand weaving a tallit for the men to wear in services, and the beautiful red roof tops overlooking the ancient city. 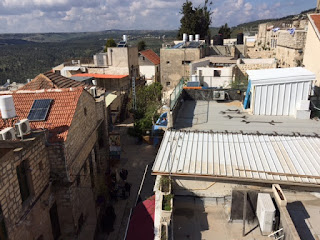 After Tzfat, we kept the tour rolling by driving up to the Golan Heights. Perhaps you've heard about this disputed territory that was won during the 1967 Six Day War. People who don't understand the situation have asked Israel to give this land back; however, standing on these hills, it's quite evident that Israel needs them for her very survival. The land is between Syria and the West Bank. Before the Golan Heights belonged to Israel, she was constantly bombarded with rocket fire raining down from these heights. Furthermore, the Kinneret, Israel's drinking water, would be easy for her enemies to get to without control of this land.
Posted by Catch My Words at 6:00 AM 5 comments:

#WW How to Flush

Throughout Israel, one finds a variety of toilet flushers. Most of them round and split. A small button for liquid waste and a bigger button for the heavy crap. Although these are quite foreign from those found in America, none of them came with directions––neither in Hebrew, Arabic, or English––on how to use them . . . except for one.

Bwaaa! I'm glad they told us because we Americans have no idea how to use this kind. As a side note, if this sign had been written for Israelis at this tourist site, it would not be in English. 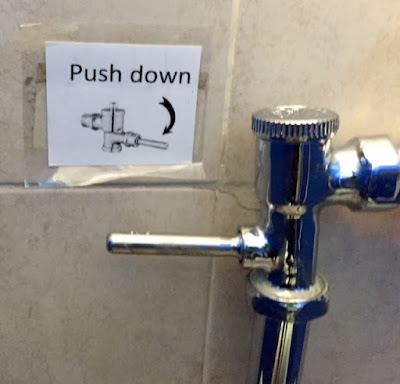 This week's Monday Music Moves Me assignment is theme songs. Since my husband and I are closing in on our 30th wedding anniversary, I figure I'd start the theme songs with ours. The words are not exactly good for a couple's theme song, yet while dating, we continually swayed on the dance floor to this one, so it became ours.


While we're on the topic of my husband, here's another song that makes me think of him. Not only is he a super athlete who leads others to bike 100 miles and has run multiple marathons, but he's also made major leads and bonds to help me with various problems.

April is a special month because it is the birth month of my men. On April 6th, we watched our first born become stinking old! How can I be 29 years-old when my kid just turned 28? Then again, I haven't been 29 in years because lying upward is more fun. 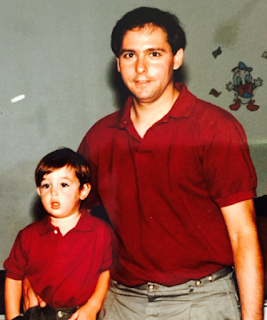 A week later, April 13th, my husband will turn 43. When he turned 50, he decided to age backwards. . . which makes me a total cougar, if I'm 84. Heck! I'm a cougar at my real age, too. So here's my choice, I can be a twenty-nine year old, having a kid whose twenty-eight or an eighty-four year old being married to a forty-three-year-old. Neither, sounds like a good option.

So, let's go back to my post title: My Men. It used to be this way. There was a time when I had my man and my little man. I still have my man, as in we're getting ready to celebrate our thirtieth wedding anniversary; however, with my husband turning 43, that means I should be in jail for hooking up with a thirteen year old back when. 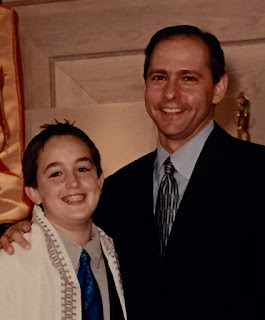 As for my little man. He gave up being mine. First there was his car. Daniel's first word was "car," so how was a mom to compete with a Jetta. His first car was actually an old minivan--Dontarius, but I'm not sure whether or not he loved it like his Jetta. As for my husband, he's not only smoking hot, but he's also quite clever and observant. When Daniel was sixteen, and the law specified that he could only have one passenger at a time with his new driver's license, my husband was quick to notice that the back seat of the van was no longer in the garage. So, when Daniel pulled up to a friend's house with a van full of teenagers, we were waiting in the driveway. 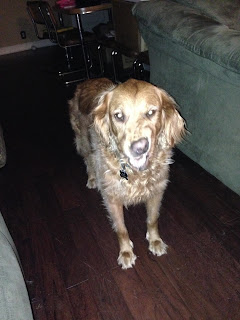 Perhaps you've noticed Ruby as the goofy picture that is my blog logo. She is most certainly Daniel's girl, and they've been hanging around together for nine years. However, he left his love with us for the Israel trip and has yet to pick up his package, so maybe she's losing momentum. Maybe, just maybe, he loves me more than his dog. Fat chance of that.

That's okay. Mothers aren't supposed to stay as number one in their sons' lives. Number one is what I'm supposed to be in my husband's life, and I am. Right, Mitchell? Mitchell? That's right isn't it? He's not answering. 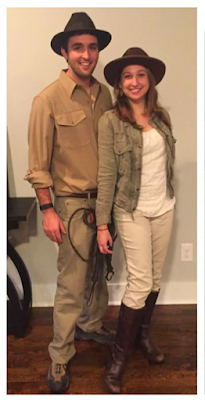 Anyway, happy birthday to Mitchell and Daniel! Whether you claim me or not, I still belong to the two of you . . . and my girls! 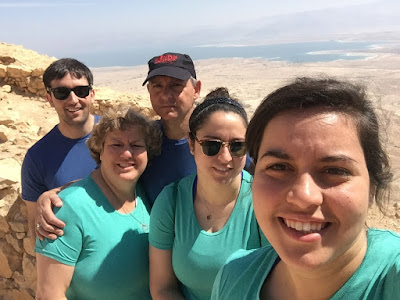 From Airport to Jaffa to Mul Kineret

Remember my fortune cookie: You will soon be crossing great waters on a fun vacation? It actually was true, but I didn't want to say much about this on social media. I've spent the last week on a family vacation in Israel. Being that our 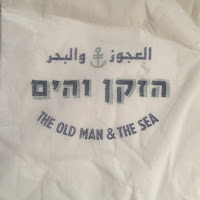 youngest daughter has been living in R'hovot since September, and my husband and I are celebrating thirty years of marriage come May, we needed to go for a visit. In fact, I told my husband, "If you don't take me somewhere good, there won't be a 31st." So, here we go with the whole family!

Shortly after arriving from a ten hour flight into Ben Gurion Airport, we drove north to the beautiful ocean shores in the city of Jaffa. When my son asked where The Old Man in the Sea was, I said, "In your room on the shelf." He didn't mean the book. We dined in a delightful place along the shores of the Mediterranean Sea. 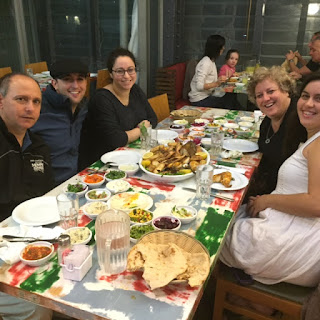 Having never been there before, finding the entrance to the place was tough. Remember, we had just arrived from a ten hour flight, not counting the trip to New York. When we passed the back door into the kitchen, the chef let us in while announcing, "The VIPs are here!"

He was probably thinking, Oh good, some dumb American's. Upon sitting down, we heard click, click, click as they slammed forty tiny dishes of interesting salads in front of us. And the fish platter. Egads! Face and all. 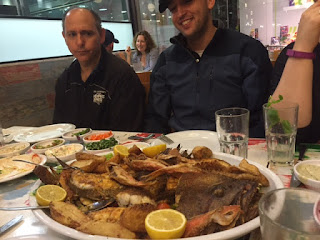 Notice the concerned look on my husband's face as he worried about the bill. We weren't good at saying, "LO!" when the pushy staff brought everything.

"Don't worry. You like. It good." Yes, it was; however, I felt a little guilty knowing some fish gave its life on a hook, and we didn't even eat him. We were so full, that we probably left more on the table than we ate. :(


After leaving the restaurant, we 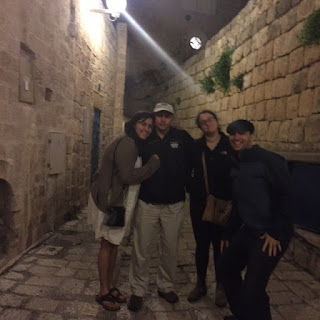 wandered through the streets of Jaffa and back to the car. I actually saw a fountain and square I'd remembered from the last time I was in Israel thirty-one years, ago.

Finally, we drove two hours to spend the night at a tiny bed and breakfast off the Kinneret (Christians refer to it as the Sea of Galilee). It was a cozy little honeymoon suite for five of us. While my middle daughter was in the shower, my youngest and I explored the outside of our room and decided to mess with her. The window to the shower was slightly open so we pushed on it. Joke's on us. We instantly heard the voice of an angry man. Oops! That wasn't our bathroom. 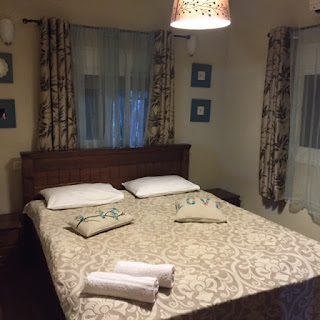 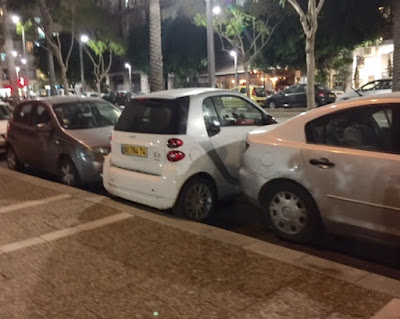