Tremors in the Earth

Did y'all feel the earth wobble last Monday? If so, it was probably our Founding Father's rolling over in their graves. You see, way back when, these distinguished gentleman decided to invent the Electoral College because they believed that the average person was not smart enough to make such an important decision as to choose the leader of our country. To safe guard us from getting someone 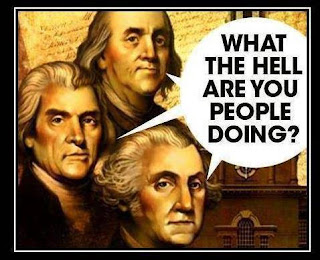 unqualified for such an important office, they decided to have electors, people strong in their parties and knowledgeable about the process, to be the ones who actually cast the votes for the president.

That way, if the people chose someone whose lack of knowledge and experience in the office could be harmful to the country, that person wouldn't be able to become the president. Obviously, our fail safe method didn't work. If the electors were what our Founding Fathers meant them to be, they would have gone against the people's choice and chosen a better qualified Republican for office. I have to wonder about a leader whose best cabinet pick is Sylvester Stalone. God save America.
Posted by Catch My Words at 11:58 AM

This whole situation has me flabergasted.

I hope America, and the world, survives Trump.

New Zealand's prime minister just resigned for no (bad) reason. He handed the reigns over to another member of parliament and the government keeps going. I'm curious to see how things go in the USA.