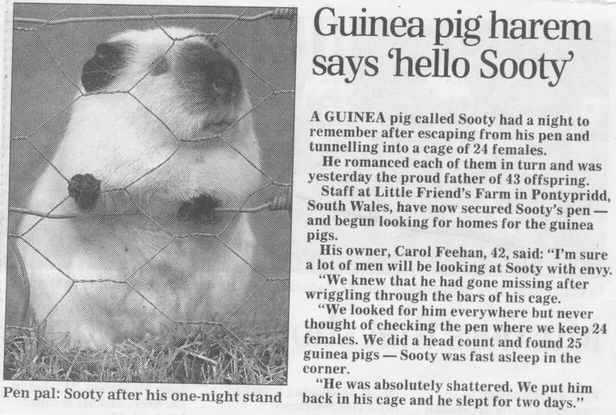 The truth is stranger than fiction. Check out this newspaper article. Also this can be found on The Telegraph (UK News) and the BBC.


Guinea pig harem says 'hello Sooty'
A GUINEA pig called Sooty had a night to remember after escaping from his pen and tunnelling into a cage of 24 females.


He romanced each of them in turn and was yesterday the proud father of 43 offspring. Staff at Little Friend's Farm in Pontypridd, South Wales, have now secured Sooty's pen - and begun looking for homes for the guinea pigs. Owner Carol Feehan, 42, said: "I'm sure a lot of men will be looking at Sooty with envy.


"We knew that he had gone missing after wriggling through the bars of his cage. We looked for him everywhere but never thought of checking the pen where we keep 24 females. We did a head count and found 25 guinea pigs - Sooty was fast asleep in the corner. He was absolutely shattered. We put him back in his cage and he slept for two days." 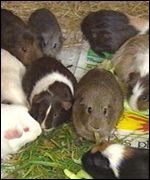 Meet the kids from Sooty's two nights of passion.
Posted by Catch My Words at 10:36 PM 10 comments: Links to this post