This week's challenge is to blog about a favorite movie. When it comes to comedy, there is none funnier than Rat Race. This 2001 film contains an all star cast: Whoopi Goldberg, Kathy Bates, Cuba Gooding Jr., Breckin Meyer, Amy Smart, Paul Rodriguez and several other big names. If you don't see a familiar face in Rat Race, you don't watch movies. 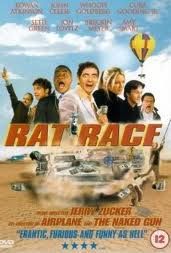 Although Rat Race is a remake of the 1963 movie It's a Mad, Mad, Mad, Mad World, it's even funnier than the original. Multi-millionaire Donald Sinclair (John Cleese) chooses winners from a Vegas slot machine to compete in a race across Nevada to a locker containing a bag with $2,000,000.

Each character has his or her own comedy story which adds to the humor. Here is a clip of Mr. and Mrs. Pear (Jon Lovitz and Kathy Najimy) and kids when they stop at the Barbie museum.


Here's another clip of two brothers Duane Cody (Seth Green) and Blaine Cody (Vince Vieluf) as they find themselves in a bit of trouble on the road. Hysterical but still not their funniest scene in this movie.


If you haven't seen Rat Race, go rent it! I dare you not to laugh out loud. You may join the hop by going to http://www.writerspost.net/