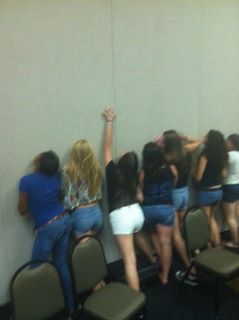 At the University of Central Florida, these young women were hypnotized. They think they're in love with the wall. Teehee!
Posted by Catch My Words at 7:28 PM 32 comments: Links to this post

Is it me or do these two celebrities really look alike? I've always seen a resemblance between Mick Jagger and Don Knotts. Now for a good laugh, picture Don Knotts on stage dancing in rock and roll glitter… or Mick Jagger playing Barney Fife or the dentist in The Shakiest Gun in the West.

Now that would be funny.

Above is one of my favorite movie scenes. Don Knotts attempts to become a dentist, but this patient gives him trouble.
Mick Jagger's singing is phenomenal, but every time he moves those big lips, I think, Don Knotts. Just ignore the hair, cool threads, and confident swagger while focusing on his face. Then picture Barney Fife ripping off his deputy shirt and tossing it across the police station. Do you see the resemblance? Clarity.

Here's a pair I often confuse. Do you? How about some clarity here?

I guess all these white guys look alike. Is it clear who is who or do you ever watch a movie and ask yourself, Is that Jeff of Nick?

I also confuse these two and need more clarity…

Posted by Catch My Words at 9:30 PM 15 comments: Links to this post