Many ambitious people strive to be the best, but sometimes ambition can be misdirected. I hope y'all enjoy my post on choice winners for ambition, along with my writer's privilege to stretch the truth. ;-) 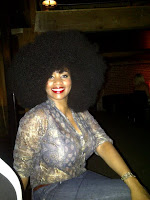 In New Orleans, lives Aevin Dugas who sports overly ambitious hair with the world's largest afro. Her hair measures a circumference of four feet, four inches long. Heck! I have students that size, but I wouldn't want them stuck to my head. Having super-sized hair includes a few problems. For example, once Ms. Dugas got her hair stuck in a car door. After that, her son, who was waiting in the car, thought it was a rat and beat it with his little league glove. At least he didn't have it stuck in his drink like the dude at the bar.


Another winner is a bozo named Scotty Kay who wanted to set the record for getting the most women to kick him in the nuts. At least we don't have to worry about him passing his idiot genes to future generations. Check this out. Is that ambitious or just plane stupid?


And if that isn't enough, here's ambition with Michel Lotito, also known as Monsieur Mangetout, who holds the record for the largest meal ever eaten. This dude ate a Cessna 150 airplane. Unfortunately, after eating the plane, he heard a mysterious voice from his insides. Apparently, he'd accidentally swallowed a passenger who'd fallen asleep and missed deplaning. So the moral of this story–next time you fly–STAY AWAKE!
Posted by Catch My Words at 8:17 PM 8 comments: Links to this post

#GBE2: The Blog–One Year Ago

One year ago, I'll bet you had never heard of "Catch My Words." Although I started this blog in July of 2009, my posts were infrequent and ignored. In reality, my blog didn't actually take off until the A-Z Challenge in April 2011. Last year at this time, I'd received under three-hundred hits total and had as many followers as I could count on one hand.

I also posted sporadically. Looking back to last year, I had posted once in August and once in September. The September post, an editor's writing contest, received zero comments. After that, I didn't post anything until November–Colonoscopy This too received zero comments, even though it used a slight bit of humor. If no one reads my post, is it still funny?


My traffic just about doubled once I joined Entrecard. If you're not a member, you should check it out!

And of course I love votes on the Picket Fence. Thanks!
Posted by Catch My Words at 10:37 PM 12 comments: Links to this post