My "adult" son had asked me to participate in a prank on his "friend." At one o'clock, I was supposed to repeatedly text him the word "poon" along with one-hundred more of his "adult" friends, including an army platoon. This action would annoy someone with a smart phone and freeze a dumb phone for twenty minutes or so. Daniel's victim has a smart android device, so he was just aggravated. 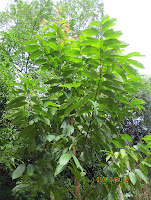 When I asked my son what a "poon" is, he told me it doesn't mean anything. Yeah, right. I looked up the word and it is a large Indo-Malayan  evergreen tree of the Calophyllum. Sounds innocent enough in a normal dictionary; however, that's not where one looks to find out what a young person's word means. The true definition––which is rude, crude, and socially unacceptable, may be found in the Urban Dictionary. Since I'm not young, I promptly refused the offer to harass his buddy. Reaching the age of adulthood does not make one an adult.

My daughter was the proud winner of the poon attack. She sent 34 messages to poor Andrew. Who? That's right. She doesn't even know him.

it was really nice of you not to give in to your son's request considering the word's meaning... others might just laugh at it, but others may take it differently... Yahweh bless.

So you were asked to poon the platoon

I think that has a nice ring to it LOL

Have a poonastic weekend Joyce :-)

Gosh. And to think we used to play board games for entertainment.

Had to look it up in the Urban Dictionary as I'd never heard of it. Is my education now complete? ;-)

this is why I don't text! haha! ;-)
Jamie
http://chatterblossom.blogspot.com/

Urban dictionary thanks you for the traffic, lol. I had to go look it up too.

Swinging by to wish you a Merry Christmas!

I had to look it up, too. I guess I am getting old because I had no clue what it meant.

I am embarrassed that I did know what it was. Though when I was younger and working in a fast food joint, the word thrown around was poontang.

I would kick his bottom too. lol

Surprisingly, I didn't know what that meant. I think his attempt to get you to text it to his friend was hilarious, though.