Although I've always considered myself to be an open thinker, age must be sinking in because the other night I was truly bothered by the casual appearance of many patrons at a fine dining establishment. My husband and I visited Ruth Chris to celebrate our 28th anniversary. Although years ago, I would have put on pantyhose and a dressy dress while 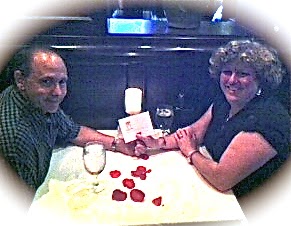 he'd have worn a suit and tie, society has relaxed its dress code. Still, I wore a dress with open-toed shoes while he wore khaki pants and a collared shirt. I consider this style to be dress casual but fitting for a fancy restaurant in 2014.


At the surrounding tables, people wore jeans. One fellow even had the gaul to be seated with work out shorts and a T-shirt! Since when is it appropriate to wear sloppy attire when dining in a nice restaurant? Our servers wore tuxes while the manager had a suit on. Are we that lax of a society where people can dress sloppy when fine dining? I've also noticed this lack of style at the Orpheum Theatre. Once again, shouldn't a live stage production at a pristine place require at least a casual skirt or collared shirt?

Maybe I'm old school, but this societal casualness seems to have gone a bit too far for someone who used to dress up for air travel. Although, I'm glad we don't dress in that venue anymore with all of the extended wait times at the airport.

So, I ask, Dear Readers, is this lack of formality American or taking part throughout the world?

Email ThisBlogThis!Share to TwitterShare to FacebookShare to Pinterest
Labels: casualness in America, jeans in inappropriate places, my commentary, sloppy dress at nice restaurants, too much casualness, where T-shirts won't do

Was anyone wearing pajama bottoms? I hate that.

Yes. I hate the lack of formality. I am pretty young and most of the people around me, are so informal it drives me crazy. It is sad but I am one of the few young folks who wish I was older.

I don't know if it's just American or worldwide, but I find it disrespectful and I long for the days when the host, hostess or m'atre d would require a standard of attire to be seated.

I'm okay with no ties, thought I do love a man in a three piece suit.

I think America has gotten very casual. I can't say for anywhere else in the world because I have never been. I believe a lot of places have ignored strict dress codes to gain more business. They want people to feel comfortable visiting their establishment. Still I agree with you in that fancy restaurants require fancy dress and should really demand it.

the culture has changed!! Remember back in the 80's being appalled how some dressed at get this OLIVE GARDEN. Back north in New England, honey we DRESSED when going out, it's what YOU DID, it was exciting and a treat.

One time my husband wanted to stop in at a crab restaurant on the beach. We just fished ALL day, i was sweaty and muddy from our extreme sporting. I looked at him and he knew, he never asked me again and respects my needs. I just don't feel comfortable meeting people, socializing with clothes that I know are dirty and not presentable!!

Do i judge others? NO, however I am not dining with them :)

I don't think barefoot is accepted anywhere...heck they are TOPLESS at some restaurants here in Palm Beach County...ahhve~

Back in BC (before children), my husband and I hiked the Grand Canyon. When finished, we were dirty, tired, and starved. The only place to get food looked like a fairly nice restaurant, so my husband asked if we could dine looking so sloppy. The maitre de graciously led us to a back table away from everyone else. We were embarrassed to be there in our attire but too tired and hungry not to take him up on his kind offer to seat us. I think they were used to weary hikers there.

At least we were aware that we were under dressed.

Wow, that's crazy. I think I would have been embarrassed to be in less that a skirt or dress. Maybe it's a younger generation? I am at a loss really. LOL

First of all, happy anniversary!! Secondly, I don't think you're old school at all. My goodness there should be some standards involved when going out in public. I can't believe someone would go in there and eat in workout shorts.

Yes, i understand comfort. Yes, i get it that you aren't there to impress me or the wait staff. There are still times when you should be glad to be sporting something nicer than what you would slop around the house in.

How you dress affects how you feel about yourself, by the way.

Call me old school, too, but I think our society has become too lax in what's now considered acceptable attire. And, isn't it fun to get all dressed up once in a while when celebrating a special event like a birthday or anniversary? I'm with you, Joyce! Oh, and happy anniversary! :)

I noticed it at church. The kiddos go to Sunday School wearing t-shirts, sandals and shorts. When I was a kid, you wore your Sunday best every Sunday (hence the name I suppose). ;)

Happy anniversary hope you had a good one and yeah the way you dress expresses who you are as a person and tells people about your apperance.

I came back because I forgot to say Happy Anniversary!!

Happy Anniversary!
And yes, I think the casualness has gone too far to the sloppy side. You should always dress according to the event/surroundings I say. Just because it's respectful and good manners. Not everyone can afford to be dripping in designer clothes and jewels of course, but you can afford a nice shirt, tie and pants if you're a guy, or a simple wrap dress or something if you are a woman. It's not that hard.
And... isn't supposed to be fun to get all dressed up and go out? Isn't that kinda the point?

Happy Anniversary! I'm surprised that they let him in like that. At the Ruth's Chris in Chicago someone we know was told to leave and come back when they put on a tie. They stuck to the dress code at that one. Now, we have been to Ruth's Chris twice. Honestly, I would rather eat cheap Taco Bell than go there again. Neither time I was impressed with the food, especially for the outrageous prices they charge.

Our food was fabulous and I'd go back for sure. Plus, we has a $100 gift card from one of my husband's clients, which made the meal even better. I guess not all Ruth Chris restaurants are the same. The one in Memphis is fabulous.

I will say we see it in parts of the world. Generalizing way more than I like too, we found the Spanish still dress well, as do several other European countries. Many of the more conservative countries have dress codes. Here in New Zealand, causal is the general attire.