My GBE2 blogging group asked us to post on the topic of "Wish," so here goes.

I want to publish a novel. Not self published or blog published, but set to print by an editor or a respected house. Caroline Kooney's first eight books were never published; plus, the average writer takes ten years to make their dreams come true . . .  or nightmares begin. I'm not sure how many years I've been writing, but I guarantee it's under ten, and I'm only working on my sixth manuscript. Here's what I've written in order of completion.

1. The Friendship Puzzle (MG) - An experiment in novel writing that's missing a plot. Who needs a plot when I've got the gorgeous John Katou and the bubble headed tween who loves him? Okay, this one will never be published, and I dare confess that I did clog a few slush piles with this piece of trash. Sorry if it ever landed across your desk.

2. Don't Eat Chipmunks (MG+) - A promising camp story about a boy lost in the Rockies with his two worst enemies and an injured counselor. The boys must learn to work together or die as my novel did when the Sydney Taylor people were offended by my portrayal of Jewish camp. Sorry guys, but the "Anaf Boys Choir" really did sneak out at night in their underwear to sing Silent Night and the memory was too good not to write about.

3. Being Bompsy Carleffa (YA) - This masterpiece about Ben, a kidnapped mob teen thrust back into his previous world, is filled with roller coaster suspense, action, and clever characters. However, it's also been rejected more than any novel I've written. One agent reported that my main character was "too funny for the trouble he was in." I can't help it! Every time I write, funny pops out. There's got to be a market for it somewhere. It works for Gordon Korman.

4. The Killer Who Loves Me (YA) - This is the sequel to my unpublished Bompsy where Ben finds himself conflicted by the thought that he may actually "like" his criminal father. At least this one does not have multiple rejections. Furthermore, I started the third book in the series but stopped midstream when I read about not writing sequels to books that aren't published. I guess Ben can rest assured that he won't be shot at or beaten until someone picks up Being Bompsy Carleffa.

5. Mrs. Zimmerman's Donuts (MG) - Coddled loser meets Mohawk boy who teaches him to be cool. I wrote this one with the guidance of two published authors telling me what works and what doesn't. I even cracked myself up by getting a kid's head caught in a hand dryer and shooting his spittle across bathroom tiles. There's got to be a market for a kid dealing with a helicopter mom because I've met so many of these overprotected babies.

6. Work in Progress (YA) - I named it Finding Miss Forester only to learn about a movie with a similar title. Dang! I'd never heard of the movie, but I guess my title must change. This is the story of a rambunctious seventh grade boy who spies his first-year teacher crying after another one of his many stunts pulled on her. Overwhelmed with guilt, he decides to behave, but instead, he has a rotten sub to deal with. Did he make Miss Forester quit? No. She's in deep doo doo after whistle blowing on a former boss, and Caleb will get sucked into her problems once I get my act together.

There you go bloggy friends––my wish waiting to be granted. And to think, you knew me when.

As a writer, I love the challenge of taking a short scene from my WIP and changing the POV, but I wonder if there is any harm in posting this scene. My manuscript has not been sold, or even queried yet, but I will be in the process of sending it out this month. Would a future agent or editor object to my 250 or so words being published on my blog? I hope not.

I'm in the habit of writing everything in first person, so it was a fun challenge to convert a scene to third; however, the first paragraph was not too different, so I didn't even bother to repost it.

Here is a first person scene from MRS. ZIMMERMAN'S DONUTS:

Slater’s mom pulled a chisel-shaped knife out of its top drawer and leaned her head back. With the precision of a surgeon, she gently slid the blade downward until it disappeared into her throat. Next she thrust it out with one gigantic swing. Blood covered the blade while red liquid filled her mouth. Her eyes rounded as her lips curved into a smug smile. She winked at me! Blood gushed out of her mouth, and she winked! While the room spun in oval circles, I couldn’t decide if she was crazy or if I needed the loony bin.
When a thick, red droplet dribbled down her chin, I squeezed the back of a chair and stepped backwards. My pulse pounded in my ears, and I worried that I might hurl at any moment.
“You’re b-bleeding.” I gripped the chair with my other hand too until my knuckles turned as white as Mom’s had when she drove me home after I’d gotten in trouble the other day. “Hospital. We need to t-take you to the h-hospital!”
Slater, Calfie, and Mrs. Slatker laughed so hard tears filled their eyes.
“What are you laughing at? I think she’s really hurt!” I plopped into a chair, put my elbow on the table, and leaned my head into my palm. “I don’t feel so good.”
“It’s fake, Knob,” Slater said in between chuckles. “She squirted fake blood in her mouth!”

How about a brush with third person?
Mrs. Slatker winked at Knob, whose face had transformed to a mixture of ashen and green. He squeezed the back of a chair and placed a wobbly foot behind him.  Spastic churning bloated his belly in an achy, sick sensation.
“You’re b-bleeding.” Knob gripped the chair with his other hand until his knuckles turned white. “Hospital,” he said. “We need to t-take you to the h-hospital!”
Slater, Calfie, and Mrs. Slatker laughed so hard tears filled their eyes.
“What are you laughing at? I think she’s really hurt!” Knob plopped into a chair, put his elbow on the table, and leaned his head into his palm. “I don’t feel so good.”
“It’s fake, Knob,” Slater said in between chuckles. “She squirted fake blood in her mouth!”

Here I am once again facing my biggest road block when I should be working on Mrs. Zimmerman's Donuts. Will, my ten year old character, wants to be invited to the weekly donut party at Harrison Zimmerman's house, but to get an invite, he must be part of the in-crowd. For a kid like Wimpy Will, this could happen–like never. 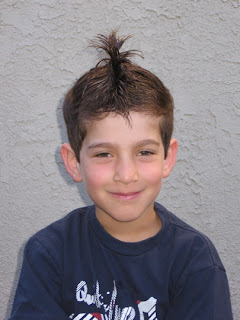 But life changes when along comes Slater, a clever fifth grader with a pointy Mohawk on top of his rounded head. Slater is eager to teach Will how to transform into Knob, the cool tough soldier; but in order to succeed, Will must pass several tests.

He certainly could do this if I'd spend more time on the novel and less time on the blog! So what do you think is my biggest road block?

Below is my opening couple of paragraphs. The first draft manuscript is almost totally complete, but it feels like a young dog: bony and lanky. I need to go back and add some meat.

Mrs. Zimmerman's Donuts
by
Yours Truly


Every Friday after school, Harrison Zimmerman invited popular boys over for a stupid end-of-the-week celebration. His mom would fry up homemade donuts dipped in thick chocolate sauce. My mouth watered as we passed his house and I breathed in the scent of those gooey pieces of dough.
Mom usually fell into a tantrum at the thought of me swallowing anything slightly junky. She fussed over eating healthy as if my gut would explode if the tiniest bit of sugar or grease tickled my insides. But the real reason I’d never eaten the donuts: Harrison had never invited me. Actually, no one had ever asked me to go anywhere.
Things were about to change.… if my author will get off the internet already. I'm a desperate boy in need of serious help! ARGGGHHH!
Posted by Catch My Words at 7:51 PM 7 comments:

It's been over a month since I've participated in Six Sentence Sunday, but I'm glad to be back with an excerpt from my Work in Progress (WIP), Mrs. Zimmerman's Donuts. Knob has just met his friend Slater's mom for the first time, and he's not used to adults playing tricks.


Slater’s mom pulled a chisel-shaped knife out of an antique cabinet's top drawer and leaned her head back. With the precision of a surgeon, she gently slid the blade downward until it disappeared into her throat. Next she thrust it out with one gigantic swing. Blood covered the blade while red liquid filled her mouth. Her eyes rounded as her lips curved into a smug smile. She winked at me!

If you like my blog, please click on the White Picket Fence or push Picket Fence Vote to vote for my blog. Thanks!
Posted by Catch My Words at 8:56 PM 10 comments: