The History of the Middle Finger
Before the Battle of Agincourt in 1415, the French, anticipating victory over the English, proposed to cut off the middle finger of all captured English soldiers. Without the middle finger it would be impossible to draw the renowned English longbow and therefore they would be incapable of fighting in the future. This famous English longbow was made of the native English Yew tree, and the act of drawing the longbow was known as 'plucking the yew' (or 'pluck yew'). 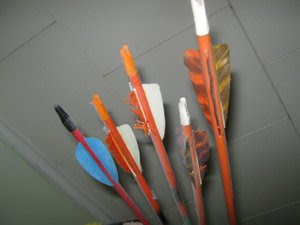 Much to the bewilderment of the French, the English won a major upset and began mocking the French by waving their middle fingers at the defeated French, saying, See, we can still pluck yew!  Since 'pluck yew' is rather difficult to say, the difficult consonant cluster at the beginning has gradually changed to a labiodentals fricative F', and thus the words often used in conjunction with the one-finger-salute!  It is also because of the pheasant feathers on the arrows used with the longbow that the symbolic gesture is known as 'giving the bird.'

And yew thought yew knew every plucking thing!
Here are some interesting tweets on the topic. I'll behave myself and not correct the grammar or spelling.

The Omg Funny King ‏ @OmgComedy
When i was 5, sticking my tongue out was like giving someone the middle finger.

Bam ol' Lady❤ ‏ @RedCake_
My middle finger has too much energy, its been up allllllll day !

Very Rude Tweets™ ‏ @VeryRudeTweets
My wife came in complaining that I never lift a finger around the house. So I did. The middle one.

Tootjuh A.K.A Louie ‏ @Tootjuh
Sometimes I gotta let my middle finger do the talking for me!!!"
Posted by Catch My Words at 6:43 PM

Have a terrific Silly Sunday. :)

When I was really little I overheard my Mom tell my Dad that she gave the middle finger to a guy who cut her off when she was driving. I turned to her, in all seriousness, and asked her: "Mommy, did he give you it back?"

A good laugh for the morning :)

Great post, Joyce. I knew about the finger-cutting threat but hadn't heard the 'plucking yew' part of the story before!

OMG! I was having my curried rice while reading this and now my laptop's covered with grains of curried rice.

You are too cute! I can't bear to give you my middle finger. :P

New perspectives are a good thing. I'll probably burst out laughing every time I see this gesture again. Too funny! I'm sharing:)

Okay this one is getting the big SHARE on my wall. I am laughing too hard to even retell your history lesson. ♥

lol. my favorite is when my son might use his middle finger to pick his nose.

This is the funniest thing I have read all day! I love this post!

A Ha Ha Ha Ha Ha!! This is great!! My daughter was just learning about the 100 years war...I'll have to incorporate this as one of her "side lessons"!! (That wouldn't be too awful of me, would it??)