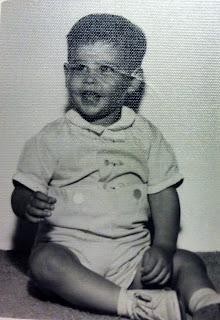 My husband's middle name is Irwin. I figure that's funny enough for me to stop writing here, especially since the name means "boar friend." And, he was born in the year of the "Boar." To make matters even better, he doesn't eat pork!

At least my husband has a middle name and a first name too. I know folks who don't even have that, only initials for names.

Although my dad had a first name, his parents had never given him a middle name, so my sibs and I named him Norton. Norton is ranked on the popularity chart with three baby Norton's recently entering the world . . . which is more than I can say for little Irwins.

There are worse names than Irwin. You could be named:

Funny!!! Thanks for making me smile today, Joyce!

So funny. As usual. Your husband is a good sport:) Or he's just used to it...

:))) I am sure your husband appreciates his wife's lovely sense of humor...Irwin is a fine name, sounds nice to me. Kiss him for me :)>

My hubs says, his family were poor and they couldn't afford to give him a middle name.

You crack me up, Joyce. I like that name Irwin. It's very distinctive and unique.

Also, my husband was born Jody Eugene S____, because apparently Jody wasn't bad enough on its own. Luckily (in so many ways), he was adopted at the age of 4 1/2 and his middle name was changed to Andrew, and he is officially J. Andrew [New last name].

One of my ancestors was called Wildboar - imagine calling a baby that name!

I haven't got a middle name and neither do my children - it's not customary in India to be given a middle name so I don't find that weird at all.

I kind of like Irwin. It was the name of a Canadian toy company years ago.

We had a German exchange student who didn't have a middle name, so when I was checking the graduation list to be sure that all the names were spelled correctly, we gave her one. When the principal called her name, she was Jil Elizabeth Stahlhut! Beautiful, huh? I love your post, Joyce!! It's 9:00 p.m., and I've just now had time to write.
http://www.foreveryoung279.blogspot.com

We had a German exchange student who had no middle name. When I was checking the list of graduating seniors that year to be sure that names were spelled correctly, we gave her a middle name. When the principal called her name as she walked across the stage, he called Jil Elizabeth Stahlhut! Beautiful, huh? I love your post, Joyce! It's 9:00 p.m., and I've just now finished my post. http://www.foreveryoung279.blogspot.com

Aah poor Irvin! I have two middle names, as does my sister and niece. Most people I know only have one middle name, I always feel for people without one at all. I love having two, it means I have 4 initials.

This is such a cute picture of your hubby! I like your list of worse names. Although it seems like the Zappa kids are holding up okay.

Oh, Irwin isn't so bad! My husband wasn't given a middle name, for which he is not at all happy about! I just assumed everyone had a middle name. NOT! :)

I wonder if any Irwin's have read this yet? Ok I know who Moon Unit and Dweezle (gets my vote for worst ever name), but who is Dog Breathe - please tell me you made that up :)

Haha. When I'm writing stories I sometimes give my characters very funny middle names. They only every get seen on the character profiles so it doesn't really matter and always brings a smile to my face :)

My husband has a middle name it's I-R-W-I-N. Sorry, have the Oscar Mayer song in my head ofter reading this.

LOL well you could look at Irwin in another way Herwin see I'm a genius...but if you wanna real laugh my middle name is Kevin pleeeese don't tell anyone arggghh!.

Have a Dweezletastic day :mrgreen:

When they were alive I had aunts named Ethel, Hazel, Mabel, Edna, and Mary. Married to Emory, Eugene, Myron, Burt, and Bill. No idea how Mary and Bill lucked out.

I bet your dad liked his makeshift middle name, just because it was his kiddos who gave it to him. ;)

My husband has no middle name and his first name is difficult to pronounce so my nephew started calling him Pickle. It stuck and now, according to all family members and a growing number of friends, that's his name. At least it's not Dweezle.