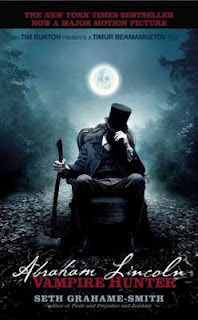 I flipped through HBO's movies on demand and found a twelve minute preview of Abraham Lincoln Vampire Hunter that happened to be 11½ minutes too long. I mean really. Honest Abe doing fancy kickboxing while slicing blood suckers with his hatchet? What will they come up with next?
*George Washington wrestling the Abominable snowman in the Florida Keys?
*John Adams wearing a hula skirt and singing Bali Hai?
*Maybe they can dye Thomas Jefferson's hair black to turn him Goth!
Is there not any respect for our past presidents? 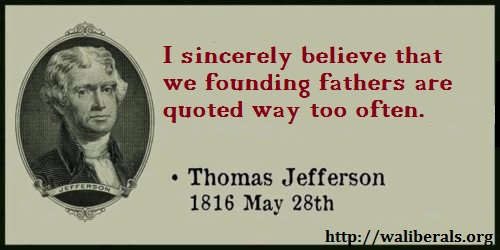 The writer obviously knew little about Lincoln because a true movie about him would surely be a comedy. I kid you not. Lincoln was funny! Here's my favorite anecdote about him.
A visitor once asked Lincoln how many men the rebels had in the field. Lincoln replied seriously, “Twelve hundred thousand, according to the best authority.”
The visitor turned pale and gasped, “Good Heavens!”
Lincoln continued: “Yes, sir; twelve hundred thousand. You see, all of our generals, when they get whipped, say the enemy outnumbers them three to one, and I must believe them. We have four hundred thousand men in the field, and three times four makes twelve. Twelve hundred thousand; no doubt about it.”
If you want to read more, click back to my post Lincoln Was Funny!
I confess! This little clip gave me better entertainment than the twelve minutes preview of Abraham Lincoln Vampire Hunter. Enjoy!
Posted by Catch My Words at 7:19 PM

There is no limit as to what they will produce and air. I, however, do have limits and this crosses mine. LOL

Well, the movie is based on a pretty popular book of the same name. There's a few books along the same like, Pride and Prejudice and Vampires for example. They were pretty popular when the Twilight books/movies were first starting to gain popularity.

Have a terrific Silly Sunday. :)

As for respect of last presidents, of course it depends on who. As long as its not the likes of our dear Bush boy junior. I'd even tip my hat (a tiny bit only) to Bush senior, at least only in comparison.

Although I despise said president, I respect the office; therefore, I was quite offended to see underwear clad paper dolls of George and Laura Bush while he was in office. Now the shoe thrown at him... I confess, I laughed hysterically.

I've never really thought of Lincoln as funny. Who knew... Love the anecdote but I'm with you, I definitely can't see him slaying vampires. Sheesh...

Loved the story about Lincoln! He had a great sense of humor. :)

When I saw the trailer for the movie, I thought the same thing you did. I didn't know Lincoln was a funny guy. He always seems so serious in his photos.

Lincoln's sense of humor is one of the best kept secrets in history. Although he always looked serious, he was probably the most witty president we've ever had. Google "Lincoln + humor" and I'm sure you'll see a multitude of stories to back my accusation.

I never thought of Lincoln being funny. I guess because I never got into politics and I failed history. Ha Ha !

There is no limit as to what they will produce and air. I, however, do have limits and this crosses mine. LOL

I read the book and I have to admit, I was shocked when I heard they had made it into a movie. I do want to see it because I enjoyed the book. It is a really interesting concept.

I just saw a preview for this movie and just sat there shaking my head. Are they just running out of new movie concepts in Hollywood? This one just does not interest me!

I have to agree. This movie looks stupid! Maybe Hollywood is finally running out of movie ideas!

Hi, I believe your web site might be having internet browser compatibility issues.
When I take a look at your site in Safari,
it looks fine however, if opening in Internet Explorer,
it has some overlapping issues. I merely wanted to provide you with a quick heads up!

Besides that, great site!
My webpage - Scott Tucker Kansas City