If karma is real, I must have done something dreadful in my past life. Perhaps all of us teachers burned multiple villages and our students were the victims of that wrath. They take pleasure in helping us atone for those heinous crimes. Why else would we step into a classroom? 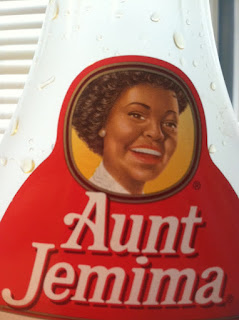 That might have been my first incarnation, but it wasn't my most recent one. To quote Steve Martin, "I was born a poor black child." Seriously, I looked something like Aunt Jemima as I watched the white folks dance with a fiddle around a campfire. I longed to join the fun but looking at my fat, black thighs, I knew no slave could dance with whites.

I saw this image under hypnosis at a college event at the AEPi house. The fraternity hired a hypnotist for an evening's entertainment. As we sat in a circle, we closed our eyes, traveled back to a previous life, and voila––the slave watching the party.

Each fraternity brother and little sister told a unique tale of guarding castle walls or enjoying picnics with a family. My friend frantically recalled a room filled with people screaming as fog entered vents. The hypnotist immediately snapped him out of his trance.

One may argue that a brief vision of myself as a slave does not mean I was one; however, this image makes a lot of sense. Every t-shirt I own has a stretched out neckline from my compulsion to loosen anything tight around my neck. I've never been able to wear turtlenecks and seeing choker necklaces makes me ill to the point that I once got dizzy from looking at one. I always wear my long sleeves rolled because I despise anything tight around my wrists, too. Even my watch dangles loosely from my arm. Did I once endure tight ropes around my wrists while being led to my hanging?

I also find a natural chemistry between African Americans and myself. No doubt about it, I was a slave.

Before I suffered in the fields under the lash, a family friend, who has been helpful to us over the years, claims to have been Queen Isabella of Spain after a visit with a hypnotist. She has since apologized for her cruel actions toward Jews. I guess karma strikes again.

Furthermore, when my daughter was two, she told me she missed her other mother. I said, "I'm the only mother you've ever had." She insisted she remembered another mother with yellow hair who wore a doctor's outfit. Who knows? Maybe Erica really did remember another mother.

I've found a few interesting reads on the topic of reincarnation. Dr. Brian Weiss was skeptical until he met a patient recalling her past life traumas. He went on to write multiple books on the subject, which I absorbed like a sponge. A few years back, I read a fascinating work of fiction by Ann Brashares called My Name is Memory about a man who remembered all of his past lives and worked through multiple lifetimes trying to make the same woman fall in love with him. This book kept me up all night but after three years, I've yet to see the second book of the trilogy.

Now it's your turn. Since I'm the host of this post, link up after midnight. What do you think about past lives?


Powered by Linky Tools
http://www.linkytools.com/wordpress_list.aspx?id=178319&type=thumbnail">Click here
to enter your link and view this Linky Tools list...

Fun Topic Joyce!! Thank you for hosting your post!! LOL!! And for hosting the topic for The Writers' Post. I am going to have fun with this one!! :D Cheers, Jenn

I often wonder whether our connection to things can be because of something that happened in an earlier life. Take my love of dogs, for example! It makes me think that I could have been a pet shop owner before or maybe doing a bit of payback because I had disliked dogs before. The subject is indeed thought provoking! Thanks for sharing!

I definitley believe in past lives and that each life we live has some sort of effect on our current one - I just don't know how they all fit together, but I suppose no one ever will.

Hmmm, I guess I missed the boat on this one. I see know that you actually meant past lives, not just a figure of speech. Do you really think you were a slave girl, interesting. Would have been more fun to have been Isabella as she had such lavish homes all over Spain. Fun blog hop, even if I missed the mark.

I read Weiss' book ages ago.

I also tried hypnosis once. I saw what looked like ancient Greece.

Fascinating post, Joyce - and what a great topic! I shall enjoy this one, but probably won't be able to post it until early next week.
Actually, your dislike of tight collars and sleeves is bordering on spooky :-)

I do believe in reincarnation. I think we all have many lessons to learn and one of the ways we do that is to return in various lives, each presenting its own blessings and challenges. Believing in reincarnation also helps me to accept the truth that in this life, some people are born into lives that are easier than others. I don't view that as a hideous injustice--I accept it because I think it's just my turn to live this life with my current blessings and challenges, and in my past and future lives, I have and will experience many other combinations of situations in order for me to learn all that I must. We all walk the paths. Ultimately, I believe we walk those paths to understand that we are the same, something I believe to my core.

Your innate connection to African American people and intolerance for constricting items at your throat and wrists makes sense to me, but wow! I would love to try hypnosis for such a purpose (and maybe a different kind of hypnosis to help me lose the flub).

I have always been described as an "old soul," and to be honest, I've always felt like one. My oldest daughter is much the same, as is her firstborn. Sometimes you just know things, you know? My granddaughter, at 2 1/2, talked about how a man used to bring in a big block of ice to keep her family's food cold. She'd never heard of such a thing in this go-around, but she sure could describe the experience in fine detail.

I've never had any past life recollections, but in my dreams I seem to visit completely different times or places.

Hi! I’m your newest follower. Please stop by and say hi when you have a chance. I'm also hosting a blog hop - if you would like to join us :) Hope you're having an awesome week.

I couldn't imagine what I would have been in another life. I do get deja vu a lot. It's always from this life though.

My friend claims she was a Labrador in past life and she thinks I was a Panda... I keep looking for a Panda like resemblance every time i look in to the mirror. I keep thinking she could be right lol... Fun Post Joyce. Loved reading it.

I've never heard a story like that before. Pretty wild!

You crack me up! I do believe in higher powers and lingering spirits and hope I come back as my Schnauzer. Or my kids. They have it great.

I suppose I wouldn't rule it out!

I so agree with Beth. She said it all so nicely. I have read all of Dr Brian Weiss' books and enjoyed them all. Have linked up my post.