I worry about my daughter.

She wears too much makeup. 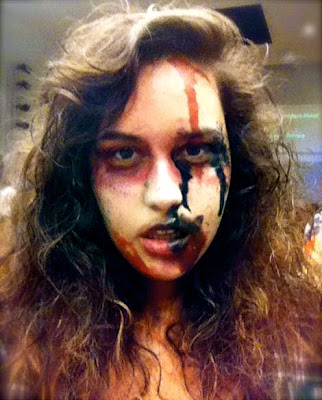 Plus, she's been chasing after men. 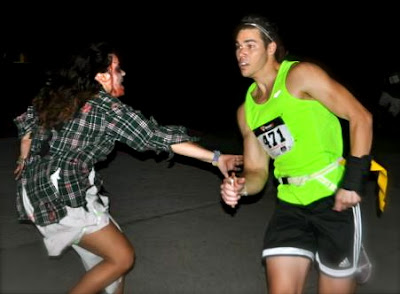 I think she's in with the wrong crowd. 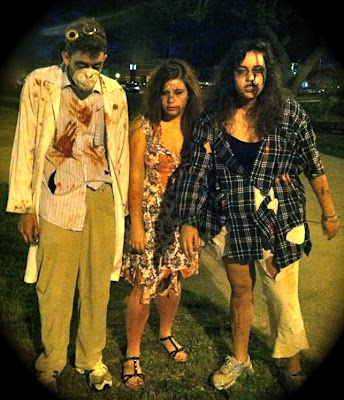 Wordless Wednesday: Running Through the Lights

Saturday night, we ran a 4K through the Starry Nights exhibit at Shelby Farms with 1,600 of our friends. I tried to take pictures of the beautiful light exhibits, but since it was a race, I couldn't stop running while snapping. Because I'm such a fast runner, the photos are blurry; but, enjoy them none-the-less.

Theme Thursday: Recollections of a Runner

As I watch the Olympic track stars, I recall my brief brush with victory in an elementary school field day foot race. We gathered at the start of the cross country course at Shaw Park while the gym teacher pointed to the various trees we were to pass. As an active listener, I took careful note of the course then quickly fell into my usual spot of DFL. (For those who are not runners, DFL stands for D%mn  F*cking  Last). 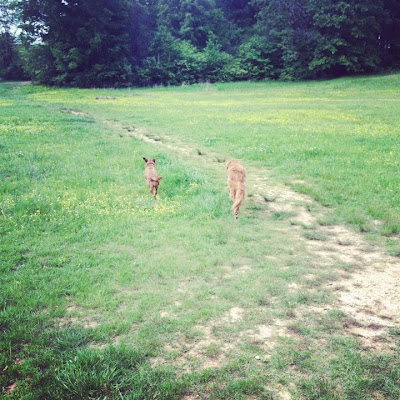 As the race progressed, I didn't understand why all the other kids were sprinting to the wrong tree. The PE teacher clearly showed us the course, but the girls weren't running it, so I hot footed it to the tree as instructed earlier.
Apparently, the adult at one tree didn't listen as well as I had. He told the lead runner to head to the wrong tree and all the athletes followed her... except for me. I found myself in the lead when the others had to backtrack to the tree they'd skipped. Unfortunately my lack of running skill didn't hold up on a steep hill right before the finish line. The former lead runner, a true athlete, passed me and took first. But hey, I received a second place red ribbon which is more than I'd ever gotten in my turtle-like existence.
In 1972, Dave Wottle was not the only runner to win after starting out in last place!

Walking away is normally not tough; but tonight, I just don't think I can manage it. See, several weeks ago, I think I did something to my leg in Mr. Mario's elementary school running group. The PE teacher had us hopping over cones. This is easy peasy for nine and ten year olds but not for old ladies like me. After that workout, the area behind my knee started to ache.

I've lived with mild pain for almost a month, but it hasn't been too bad; so I've continued running. Sometimes it hurts when I start, other times when I'm in motion, but always after a good run. On Saturday, I ran five miles and felt it after mile four.

Today Mr. Mario had us sprinting the length and width of a soccer field then resting for a minute and a half before going at it again. Turns out some of those little turkeys have been making fun of my great running talent. They must be jealous because I am consistently last, and they haven't learned how to be consistent runners.

It's okay. I have tough skin, but my porkstring, not so much. I guess instead of walking away, I'll have to limp… and you expected a deeply emotional post about "Walking Away?" Pffft.

Lashana Tova to all my Jewish friends. I'll be out of commission (and the refrigerator) for a good part of the week-end, so I'll catch you later.

After eating a disgusting glob of fat, calories, and carbs on Mother's Day, I need to get back to running. I'm a long time seasonal runner who takes up the sport when it's convenient or a group opportunity arrives. This usually happens in the summer and fall. This summer, I will once again start the Road Race Series. The event, that is filled with super jocks, begins in mid July with races every two weeks that get longer as we go.

If all goes well and I've made it to every race, I'll drop out after the 10K. In order to get a cool prize, I must complete six races, and that is good enough for me. Unfortunately, life usually keeps me from completing my six races before they get too lengthy. Last year, I missed a race and had to run 10 "fun" miles. But fortunately, I only had to do that once. The rest of the athletes will do this twice and run the most boring half marathon course known to human kind. I did it once and swore I'd never run it again. It's a straight route up a barren highway and back. Maybe some road kill could help the interest level along the course, but unfortunately, it's against Tennessee law to take road kill home and eat it unless you actually kill the vermin. Daggumit! How else could we get cheap meat?

Come fall, I'll further my running adventures by joining the women's running series. I'll meet with the intermediate group once a week, and we'll run a few miles every Monday night. So being May, I guess it's time to dust off the running shoes and prepare to lag behind the rabbits (runners not road kill).

Speaking of animals, have you seen the movie, Jumanji? When running, I often think of the panting hippo at the back of the stampede. Yep! That would be moi; but, I figure running behind the pack beats snoozing on the sofa. Although someone once told me it is better to be like an elephant than a fly. The elephant moves slowly and lives a long time, while the hyper fly zips around the window and is dead by morning. Personally, I wouldn't want to be either . . . nor do I want to be the hippo from Jumanji, but that's life in the runner's world.