You've seen the usuals--Miss Mascara-Lady brushing her lashes at the green light or Mr. Beer Guzzler weaving in and out of his lane. But one of the worst drivers I ever met was Mr. I'm-Not-Going-to-Drive-Fast-But-You-Can't-Pass-Me-Either. Have you met him? He was eighty years old and wanted to make sure I drove at a safe speed. Flying down the highway's passing lane at a whopping 40 mph, he made his Chevy rattle. As soon as an opportunity opened to pass on the right, Mr. Annoying floored it. I mean this dude drove a number that matched his age, and there was no passing him. Then, as soon as traffic clogged the right, he slowed back to forty. Was this guy for real? Lucky for him, I'm not a lulu with a gun because a Road Rager would have blasted his little gray head. 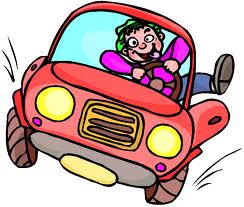 Unfortunately, he's not the only idiot driver on the road. After circling a parking lot twice, I finally found a person ready to leave. So I put my blinker on and waited a good distance back to allow the driver room to back up. Miss Rude Idiot had already driven way past this spot and missed it. Tough luck; get over it! But nooo. After seeing my signal, she put her car in reverse and blocked the person trying to back out of MY spot. Oh yes she did. And she was determined not to move until I backed up and gave her MY spot. If it weren't for the person being held captive in the lot, I would have stayed all night, but I couldn't do that to him. I'm sure she caused road rage and got hers eventually.
Years ago, I decided to do my best to control my blood pressure when idiot drivers are near. Okay, not totally. I still get frustrated when I can't turn right on red . . . not because of a sign, but due to the idiot driver who's blocking my lane. But when push comes to shove, pun intended, will this person's actions matter tomorrow? Should I really allow them that much control over my emotions? Of course not! I should just throw a rock at their car and drive off. --Just kidding.

Posted by Catch My Words at 3:00 AM 10 comments: Links to this post