This picture plus the words "Internal Affairs" is the prompt for this week's writer's post.

After the trip down The Wizard of Oz's Yellow Brick Road, Tin Man had finally gotten a heart. Possession wasn't good enough because a heart belongs in the chest taking care of internal affairs while banging life throughout the body.

So, Tin Man opened wide and swallowed the heart charms. Unfortunately, it didn't attach to his chest nor stop between non-existent lungs. The charms tumbled to the floor of his bodily barrel and made horrendous rattles every time he moved. Plus, that silly little charm tickled. 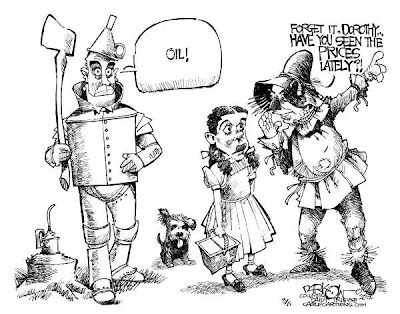 The Tin Man visited Scarecrow, who had an incredible brain, and asked him how to fix the problem. Scarecrow suggested he see an auto mechanic in Kansas. They asked Lion to come with them, but he was too scared of the noisy shop, so Tin Man and Scarecrow traveled down the flat roads by themselves.

When they reached the shop, the mechanic pulled out his power tools which sang a cheerful tune while opening the Tin Man like a can of tuna fish. At which time Toto darted into the shop and snatched the charm in his doggy lips. Dorothy pried the furry rat's mouth open until the heart dropped to the ground and broke.

After that, Tin Man not only had a rip in his chest but was also heartless.

And the moral of the story is don't trust your mechanic with your heart.

This is brilliant and a charming story!!! Wonderful job Joyce. You have a gift!

Nice! And I really love the cartoons too!

Very creative! It had a great rhythm to it!