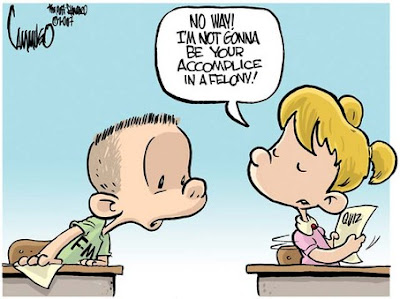 I'll never forget that day back in the seventh grade when my classmate placed a cheat sheet under a desk during a test. Although the scrap of paper was in my clear view, I told myself I wouldn't look at it, but oh, the temptation when I came to that one question I didn't know. I took a quick peek before writing the answer. Next came the guilt. No one knew I cheated but God and myself; however, I was so bothered by this one event, that I never cheated on another test again.

Unfortunately, my college classmates did not resist the cheating temptation. The professor broke us into teams and had each group write five test questions to go along with his questions. I studied for that test only to find myself totally shocked when I learned about rampant cheating throughout my class. Apparently, many of my classmates, in helping people professions, passed questions from group to group. My faith in humanity was shattered.

Looking back, maybe I should be glad I broke temptation in that seventh grade class for if I hadn't, perhaps I'd never know how awful feeding into temptation feels.

I know of two people who have misread my actions and believed me to not be of high moral character. How does one convince another that they are totally wrong once the mind is made up? Being one who has always prided herself on having a strong moral character, this is one of the most frustrating and offensive things in my life; however, sometimes people believe what they want to believe whether it's reality or not.

No one is perfect. Don't beat yourself up to much. The fact you never did it again and felt bad proves you are a good person. Everyone can be tempted. It takes someone a notch above to have gotten away with it to resist doing it again. I give you a lot of credit for confessing.

It's incredible how many people are willing to cheat or lie to get what they want.

I am utterly disappointed that my young elementary school students have no qualms when it comes to cheating so as to score higher marks than their classmates. :(

let them believe their own fallacies.....and sometimes temptation is not a bad thing....

You shouldn't bother yourself too much with the others, after all they are humans and hence not perfect. I have never cheated, but I have succombed to more temptations that I can enumerate, not all of them bad or evil. :)

Living by your values brings its own rewards. Don't you feel pride in yourself? Well, the ones in your college class don't, and that's obvious. The quiet and peace in our hearts because we do have values is our reward. Look at the 'cheaters', look how miserable they are. I'm a lot like you describe, feeling regret over small lapses of integrity even decades ago. Our self-esteem isn't fake, isn't inflated from false praise or minor achievements. That's why we do it Joyce, I'm sure you'll agree.

Hello.
We all try to do the right thing, but we are imperfect humans and will always succumb to one temptation or other. Those who take the moral high ground need to take a close look at their own characters before passing judgement. Thanks for sharing.

You are right, people will think what they want to think. I don't live my life by what others think. As long as I feel that I have done right by myself, my husband, and my kids, I sleep just fine each night.

I think there was a study that shows that so many of the students today cheat, and they have various reasons for doing it. I think that as one grows older, one realizes that when one cheats at school, one is just cheating themselves out of an education. The sad thing was that most of them felt little or no remorse for doing it. Sometimes temptation to do bad things is not even looked at as doing something bad. It seems as if we have lost some of our values. And all you can do is ignore those who think bad of you and just know how you feel in your heart.

Thanks for sharing such a great story with us for this weeks Temptation Theme Thursday.

I love this post, and I see from the responses that I'm not the only one who can relate. And for those who think we have done something questionable, but we have not....stop trying to convince them. It doesn't matter so long as you know.

I love this post, and I see from the responses that I'm not the only one who can relate. And for those who think we have done something questionable, but we have not....stop trying to convince them. It doesn't matter so long as you know.