Survival of the Cutest

After being up from two to three this morning, I've decided that Mowgli would never survive if he weren't so stinkin' cute; however, it could be worse. At two AM, Aleda (the only one posting at the time) writes, "Sick dog in a high-rise....not fun. :-(" Our Mowgs was just feeling playful. 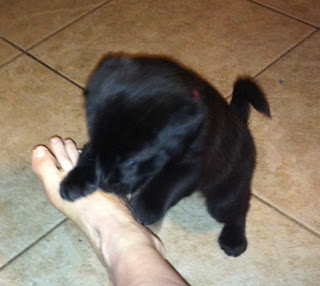 Yesterday, Judy left for a two week stint as a camp counselor, so we are the official

The little guy fell asleep under the desk at three, so I shut the kitchen doors and crept back to bed.

At seven, Mitchell charged into the room. "I can't find Mowgli!" He'd fallen asleep on the porch with the doors closed, but puppy breath was missing. Shortly after hopping out of bed, Mitchell spotted him under the couch. See the tiny flap? He was asleep under there. I tried to pose him under the couch for a picture, but Mowgli was more interested in biting my phone.

Oh, no! Here's Mitchell asking where Mowgli is.

"I thought he was with you," I said. Nope! He's on the porch once again looking so stinkin' cute.

Let me leave you with the song that's
been stuck in my head all week.

I have said emphatically since Sadie (Bichon Frisée) came to adopt us, "God made her so cute so her humans would allow her to live."

She just had her 12th birthday this month and has calmed down and mellowed with age into the lap and lazy dog the books told us she would be. They did not tell us it would take 10 years.

Being cute sure has advantages. It makes them more acceptable to human hands. That presumably will enhance their emotional being and so make them live longer! Nicely Joyce!

Good thing that puppy is cute for sure!!! I don't envy you training a puppy!!

He's adorable and so is his name. We love jungle book !
Stopping by from Jenny's linky party..
-Reshama
www.stackingbooks.com

He is a flippin' cutie!

Sorry, but I can't listen to your song -- out of fear it'll end up stuck in my head with all the other tunes already floating around in there. :)

He is too, too adorable. Yes, saved by The Cute.

He is so precious.

omg he is so stinkin cute and I LOVE that his name is Mowgli...!!

I can't handle the cuteness of Mowgli! (And I love the name, by the way.) I had to show this to my husband, who wants a puppy despite the fact we have three dogs. My purpose was to remind him we can't foster puppies for the rescue we volunteer with, because puppies are so much work.

However, your post and photos had the opposite effect, and that plan pretty much blew up in my face.

Give some mushy kisses to Mowgli from the Newlins. He's a doll!

Under the couch! How funny! And you called him 'Puppy Breath' lol. That was funny too. :) What a sweet little cutie pooch.

What a doll he is! I often tell Pablo (our boxer) that he gets away with so much only because he's so cute!

So stinkin cute. I haven't heard Jungle Book in forever. Hopefully naps are in your days since nights have been long :)

Wow that dog is an 11 on the cuteness scale!! I love it.I hope you have a great weekend Joyce :)

I agree he is a cute puppy heheh!

Hi my name is Ashley. I'm an avid blogger and Creative Graphics & Web Designer. I am stopping by your blog from Aloha Blog Hop. I would love it if you would stop by ours as well. We have an awesome giveaway running right now. A winner will be chosen June 15th. Come join in on the fun!

O goodness, he is certainly adorable! And from what pictures you've shared, he looks to have a marvellously sweet temperament :)

He is so cute!! Now I'm getting puppy fever again. Which is bad because we already have 2 doggies!

Cuteness certainly is! And they take full advantage of it!

Dogs are such wonderful "people". I spent last Monday with some friends who share their life with a gigantic golden retriever named Biscuit. He's not a very good basketball player, though.

Hi Joyce .. I like the loco parentiredness .. but they are so cute and they do sleep sometimes! I doubt you'll be able to give Mowgli back ..

Realize that all the time spent now training properly will make for a terrific well behaved pet in the future. Yes, it's hard work but well worth it as all puppies give us unconditional love. Our Sadie just turned 3 and all our hard work with her as a puppy has paid off. She is the best behaved dog we have had. Good luck. :)