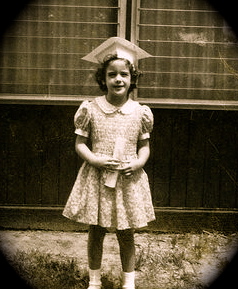 I was told I was part of the family because of a trade with the Indians. The tribe received beads, while my family got a little papoose with a red spot on her forehead. That birthmark was the true coloring of an Indian girl, me. It might have been okay if my brother and sisters had told me they were teasing; however, this stunt continued for years with little me believing it all. Okay, so I was gullible, but isn't that part of being tiny among the mighty sibs?

They had an 8½, 6½, and 4 year jump on me, and they used it to their advantage. I was their trained mouthpiece in acquiring what Mom and Dad would have never agreed to. As the Chevrolet ventured down the road, with the three of them shoulder-to-shoulder in the backseat while I sat wedged between the adults in the front, he-who-must-not-be-named would point out the window and say, "Look, Joycie. What do you see?" 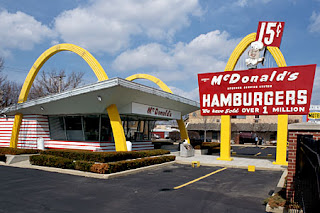 Next came my hopping dance, "McDonalds! McDonalds! Let's go to McDonalds!" Sure enough the car would slide into the lot for hamburgers, fries, and chocolate shakes, which no one would have gotten if one who wasn't so stinkin' cute had asked.

I was also subjected to constant bouts of tickling from He-who-must-not-be-named and TV high jacking, too. I don't know which was worse: being held by the arms and tortured or forced to watch Bonanza. Tickling is a definite form of abuse, especially when Gilligan's Island is on, but I was too little to stop it.

Then there were the other set ups. 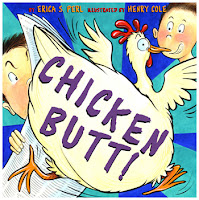 "If you tear your blanket,
you'll have many."

"Why don't you go ask Mr. Slatkin,
the famous conductor neighbor,
for his autograph early in the morning?"

Laughter as a piece of liver is shoved in my mouth

hearing fart sounds as I bite into a chicken butt.

He-who-must-not-be-named gets angry when I write about him, but he was by far the most lethal sibling. I wonder if he would have subjected me to constant torture if he knew that one day I'd have a blog.

I'm thinking this is pretty darned good payback! Although not having any siblings, I can't be sure. ;)

If he lived with you and never developed a sense of humor, there is no hope for him who must not be named.

It doesn't sound a whole lot different than my brother and sister, really. They have both apologized while giggling and to this day we all laugh about the unexpected baby didn't require extensive therapy! Though perhaps she did!

Me and my sister used to fight like cats and dogs. I s'pose that's what siblings do :)

Oh, yes, I was subject to this too. Only as the elder one who had to eat my brother's chicken butt, figuratively speaking! Thanks for the memories this evening!

He who must not be named watched Bonanza and you announced to the world, now that is payback LOL.

I was the oldest (plus my twin) so I can relate to your siblings I'm pretty sure!!!

I was the oldest, so I was the torturer. I don't know why it just seems to go with the territory (or should I say Indian Territory?)

I think he who should not named should realize that any form of publicity is good publicity...or so 'they' say. hehehe

Plus, what comes around goes around. ;)

Finally, I cannot hold back the LOL on the Indian child tale.

I haven't told my brothers about my blog. :) Funny today.Laughed so hard I almost welll ;)

The fart noise part really cracked me up. (I, um, have a very sophisticated sense of humor.)

I think most siblings go through the same sort of thing. I was unbearably gullible, too, so one of my big brother's favorite pastimes was tormenting me. He'd tell me one of my knees was higher than the other... my eyes didn't quite match... you name it. And I believed everything he said.

Bwahahahaha! I'm the youngest of five. My two sisters were always pretty nice to me. The brother just ahead of me once had me chew on tinfoil to make my toothache feel better. My oldest brother (by far the worst) gave me all kids of grief about my wildly curly hair and when he really wanted to tick me off, he'd call me Frizzy Lizzie--combining the hair crapola with a version of my name that I especially disliked. The joke's on him, though. He's been pretty much bald since he was 30. :OD

LOL this was funny. Loved how you referred to him as he who must not be named!!

You make torture sound like fun, Joyce. How do you do it? Thanks for making me laugh today!
Blessings!

Hi, featured you today at
http://mary-anderingcreatively.blogspot.com

I love it~ public humiliation, the ultimate payback! I have older siblings as well, and somehow no one can remember how rotten they were back then. Hmmm~ convenient.

he-who-must-not-be-named deserves. But you can assure him that no one would be able to figure out which one of your siblings you speak about. LOL. Loved this, thanks for the laughs. Sorry they tortured you.

oh lol I enjoyed your post. Yes tickling is torture.

Enjoyed your post about the sibs, Joyce. Funny, sad and touching all at the same time.

lol! I am the youngest of five and boy I remember being tortured. They had me believing I was either a member of the Kennedy family or that I was found under a rock. Thanks for joining us at the Let's Get Social Sunday! Diane @MamaLDiane