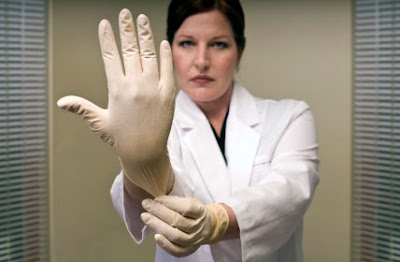 I'm home from work for two days. Wednesday morning, I saw my gynecologist... or rather she stuck my feet in those awkward stirrups and saw me. My youngest daughter–nineteen–has never had the pleasure of visiting this sort of doctor, so I made her an appointment in May and told her it doesn't hurt a bit. It's just like a trip to the dentist, except they're looking at the other end.

Next, I enjoyed a yummy lunch of vegetable broth soup, jello, and Sprite. At two o'clock the real fun began, and the gyno visit was the easy part of the day. Every fifteen minutes, I took four pills with eight ounces of fluid for an hour and fifteen minutes. To tell you what happened then would be too much information.

At seven, I repeated the whole disgusting procedure, but at least I didn't have to drink chalk like I did the last two times. I don't know why I took the last dose–obedient, I guess–but also ridiculous; there was nothing in me!

I took two potassium pills and swallowed four Dulcolax at bedtime. Nothing to eat or drink after midnight.

To top it all off, I got a Fleet Enema this morning. As if there's anything else in there. It's early in the morning, and I'm off to the St. Francis Surgery Center to have some lucky doctor look up my --- eeeeeeeek! 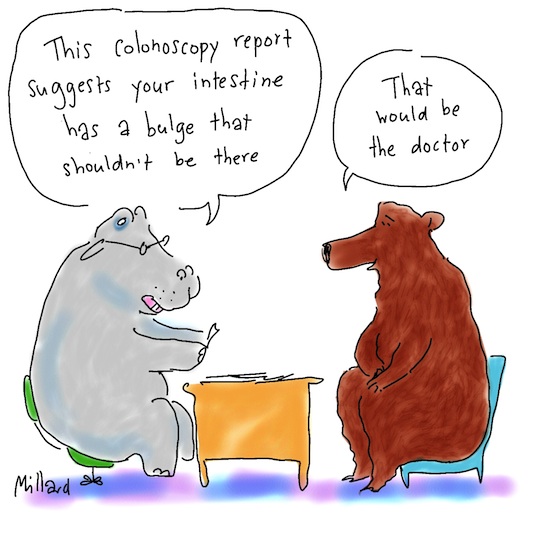 I loved the last cartoon. Just make sure you don't swallow your doctor. Okay.

I had a male doctor for my first gyno exam and it was terrible! (I was getting married, and he was the only available person to do the exam and authorize a BC prescription.)Never felt anything so painful in my life.

I read gynecologist and I crossed my legs!

That doesn't sound like a very pleasant day at all. Eeeek! is right!

Stopping by from the A-Z Challenge, blogging at Ross County Roundup and Write, Wrong or Indifferent.

I get the "joy" of having one of those every two years on the advice of my doctor (I'm severely at risk for colon cancer, it seems). "Eeek" is right.

Those doctors must hear all kinds of things during a colonoscopy because of the loopy painkillers they give to patients. For example, I don't remember this, but my doctor told me four years ago he asked how I was doing during the procedure.

"Well, it's better than being at work," I said.

Two years ago, my wife told me I kept talking to her when I was in the recovery room (again, I don't remember this."

I'd go back to sleep then wake up, look at her, and say it again. That process repeated quite a few times...

Am not going to bore you with my gyno stories, just want to wish you loads of strength!

Greetings from the A to Z trail,
Sylvia @ Playful Creative

You are a tough lady. Having a gyno apt. in one day is enough.

OMG. Love it. Have experienced one of them thar horrible operations that involve swallowing vast amounts of foul liquids. Then other foulnesses.

As they say, this too shall pass. Hope everything comes up roses.

"That would be the doctor." LOL!

This was a fantastic post with great illustrations! Oh, the things we go through to assure us good health. I've never had a colonoscopy...Eeeeeek!

Holy hell Joyce!! Eeeek! is right on target with this one! I hope all goes with your ordeal. My thoughts are with you, and I will say a prayer too. It is a wonder you didn't blow out what they were looking for with all those lovely drinks, probes, and enemas. Lord!! Good luck with that!

i dont really understand what is Eeeek is all about...but whatever it is, i wish you well and God bless..thanks for dropping by at my site..

Sounds like a horrible day all around. Thanks for stopping by my site! I'm sure you'd love reading Elantris and I promise it isn't scary at all. My roommate is also scared of windmills and Japanese writing . . .

Just had one of these. Yuck buckets. Next month a gyn appointment. Do you have any great cartoons for that?