I grew up in a Reform Jewish family in a secular community of St. Louis, yet someone near and dear to me has made the shift to Orthodoxy. During his transition to the religious life style, I flew into an airport on a Friday night, which is our Sabbath. He who shall not be named drove his car to the airport and picked me up. When we reached our destination, an ice cream cake was waiting for the birthday boy who had just driven a car. He refused to blow out the candles on his cake because it was the Sabbath, so we watched the cake melt all over the table. 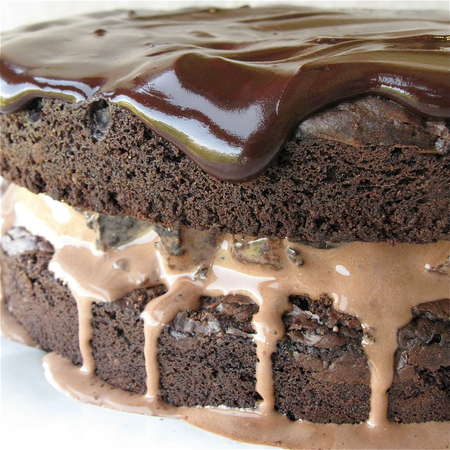 To make matters worse, I'm posting about this on a Saturday, our Sabbath. If you don't see my post on Monday, you can assume God struck me dead from  a bolt of lightning.
I close with a re-post of one of my faves.
Posted by Catch My Words at 8:00 AM

That poor cake. : ( Would it have been a crime if someone else blew out the candles? Or would he still have let it melt just on the principle?

I know what you mean. I converted to Reformed Judaim before I married my Sweetman. However, I was raised Lutheran. Went to a Lutheran school and then went to a Baptist Highschool. In Christianity, you have to follow the basic Ten Commandments and Sunday is your day of rest and you can spend it however you wish...except that you must go to churh or you may become the talk of the church.:)

Anyway, Sweetman picks and chooses how we'll handle the Sabbath. I just follow along.

And thanks for your comment on the piece I posted yesterday. And, too, I knew about the paragraph thing. Blooger was being a schmuck yesterday.

It refused my commands from LiveWire yesterday. This moring it took me an hour to fix the problem. In fact, I re-posted todays like a million times before it finally posted correctly. I'm exagerating, of course.

Even the melting cake looks amazingly delicious!
And I think God appreciates it when we see things in focus ... as He does.
Pick any line of faith - any sect or system - and you can find something that seems not to make sense. Thank God that He looks at our hearts, not our hindrances.

That cake looks delicious. Is it sad that I'm extremely distracted by the picture of that cake?? This may sound like a stupid question, but why exactly can't candles be blown out on the Sabbath?

No, God has a sense of humor too! Lovely story. I'm so glad I came over from the A-Z and found you. I immediately drooled over the picture of the cake.

God is merciful. You won't get struck by lightning. :D Cake still looks yummy, though.

What a shame to watch this cake melt. It looks so very good.

Okay on linking up the way you are doing. That works for me.

Have a terrific day and a very Silly Sunday. :)

Stopping by from the A-Z Challenge. A nice write up to accompany a delicious looking cake!

Rituals are in place for many reasons, following them for many more. Could the cake have been returned to the freezer with the candles burning? ;-)

I'd never cut it as an Orthodox Jew. Never in a million years.

Well you could have at least shared that cake with us I'm drooling :-0

Your last line "If you don't see my post on Monday, you can assume God struck me dead from a bolt of lightning" just cracked me up! Given that I'm basically a baptized Catholic (can't leave that church, at least not in THEIR eyes) but not only a lousy one but a an agnostic one, lightning bolts should be my daily lot! Have a wonderful week!

Thanks for the MacArthur park clip, too funny!