In case you didn't read enough about my colonoscopy, here's more. First, we drove to the Surgery Center and parked near signs like this: 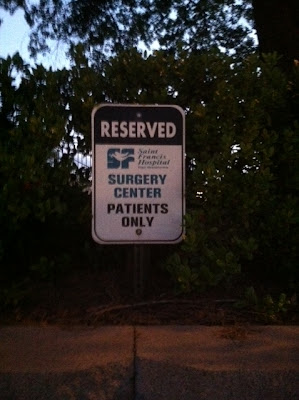 Which made no sense because patients undergoing procedures aren't allowed to drive.
Next, I headed to the reception desk where the lady asked me to show ID, as if someone is going to fake being me so they can have a probe stuck up their butt. After a short sleep, all was fine. 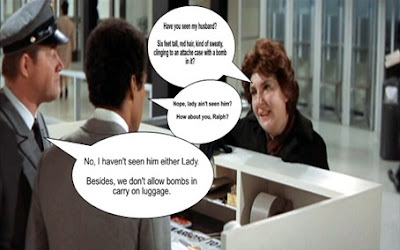 Then I came home and watched Helen Hayes in Airport. Classic! Good golly, the world has changed. A lady stows away on an airplane by saying, "My son lost his wallet," while a man kung fu grips a bomb in a brief case onto a plane without screening nor questioning. Next, a pilot argues with the aircraft control, and they listen to him. Plus, a lady cuts in line to ask a question and gets a polite answer from smiling airport staff! Good golly.
Personally, Airport was good, but I like the remake better. Airplane!
Posted by Catch My Words at 6:00 AM

I didn't see the movie!

I never saw either movies, either. But now I'm intrigued. Good point about the fact that no one would fake someone else's identity to have their surgery.

You always have the most fun!

Love the old woman in Airplane. It's been a long time since I've seen that movie.

my husband just went through his second one of those. thank god, he's been sworn off of them for another 10 years.

Glad your procedure was fine, i also had one a few years ago not very pleasant next time i will opt to be sedated :-)

I like the old film too but you cannot beat the Airplane films ...brilliant laugh :-)

have a great Sunday Joyce :-)

You are too funny Joyce and made some really great points about the driving and the ID. LOL

Hope your tests went well. I think I would chose total sedation. I want to thank you for running my entrecard ad.
Judy
Judys Postcards Plus

Notes Along the Way with Mary Montague Sikes said...

Love the airplane movies. Good luck with A to Z.

Airport and Airplane were both good! This is only the 2nd blogger I've come across in the challenge that I previously knew. I'm trying to visit all the A-Z Challenge blogs this month.

I'm visiting from the challenge circuit.
Funny post - you have quite a sense of humour, Joyce... different, that's for sure...
Enjoy !!

Only you could make a colonoscopy funny. Your humour is a treasure!

Made me smile, remembering the old Airplane movie...

I loved that movie. I didn't care for the colonoscopy that much. Well the prep anyway.

Have a terrific Silly Sunday and week. :)