Last week, a fifth grader headed into class late. I asked him where he'd been, to which he said, "I got eleven-year-old shots." 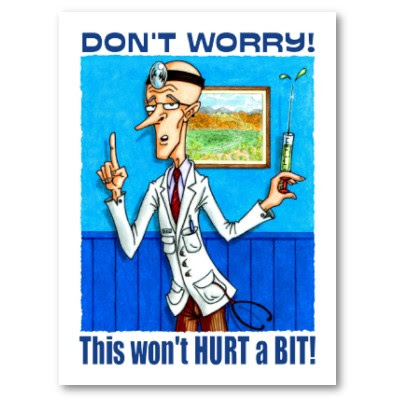 He caught on and had a good laugh, so I asked him if he cried when he got his old shots? He laughed again. Boys don't cry over shots, do they? I wish I could have been as brave when I was a child.

As a youngster–four, five, or maybe sixteen–I don't remember, the doctor told me I was going to get a shot. Naturally, I did what any chicken would do, I took off running out the door in my underwear. I had a string of nurses and various other folks chasing me through the halls. Finally, they caught me. Yes, kiddies, there's no escaping the shot once the doctor orders it.

Also, as a child, I once told the doctor he was nasty. What did he expect? The man asked me to take off my clothes. But that has nothing to do with those shots that were never worth the sucker.

When it comes to shots, there's only one kind I like.

I don't remember having any shots as a child. Don't think they'd been invented then! The first one I recall was a polio shot when I was about 13.

Ha! I LOVE those kinds of shots, too. I had to always be brave when I got shots as a child. My little brother would be in the room with me and he was a big baby. My mom told me to make it seem like the shot didn't hurt so that he wouldn't freak out too much. It was torture.

Bahaha! I have to agree with you on your shot preference, Joyce! I hate shots, too. I'm glad I'm grown up and shots are done!!

Have a lovely weekend and happy A to Z!!

I'm up for the white russina shot too! Don't remember many of my shots as a child, but remember them all as adults. Ouch!

I will take one of the shots in the glasses, but will pass on the other kind. My daughter has those 11 year old shots to look forward to in the near future. When I was a kid, I was like you, out the door and down the hall running away. It only prolonged the inevitable and they never let me have a sucker after that. LOL

Great story. My grandfather came to America from Italy when he was 17. He was a master of puns, and used to pretend not to understand the english language very well. He used to tell us we were "good for nothing". I always wondered... did that mean "not good for anything?" or rather (which I suspect) did he mean we were good, and required no reason to be considered such.

He was also fond of mixing up the word "sheet" with another word which begins with "sh" and ends with "t". He would ask us if we had "sheet" on our beds! LOL

Once, when he had a bit too much to drink, my brother asked him if he was drunk. His reply? "I'm nott'a drunk. The wine, she'sa drunk!"

Thanks for stopping by Main Street Arts and Commenting!

S is for Shepherdstown, WV

If a doctor gave those kinds of shots to kids he wouldn't be doctoring very long.

I also prefer your choice of shots. Not a fan, nope, not at all. In fact, I am not a fan of medications period. If there is any other way to fix what's wrong, I'll take it. ♥

I used to throw up. Or pass out. I did that once.

Great story! Just came by your blog from the Giggling Trucker's Wife and A-Z. I hated shots too when I was a kid. Of course in the 60s and 70s the needles were the size of knitting needles. Now they are so tiny you can't even feel them.

I like that last shot the best too. Yes I do.

Kris @ beyond the whiskers said...

Good job to the little man.

I hear ya...when I was little I notorious when it came to shots. I had locked myself in the car on purpose (before electronic car door openers) and had locked myself in the bathroom in the doctor’s office (they had to remove the door hinges) among other stunts. They used to have to hold me down and stick me in the butt. :/ Many of my friends and family get a kick out of the fact that I now work with nurses. :)

I wish I had you for a teacher! I never liked getting shots either, but I hated bringing back the cup even more. Now I really have a taste for a White Russian! Of course I only like the fattening shots too! Julie

I used to hate it when I was a kid the nurses that used to give it seemed to love giving it.

I agree the last shot is definitely the best :-)

I still whimper when I find out I have to get a shot with a needle. As for a shot in a glass... those have me whimpering the next morning!

Wishing you continued success with the A to Z challenge,
Jocelyn