My son summed it best in eight grade when he said, "When I was in sixth grade and someone farted, it wasn't funny, but now it's hilarious!"

What is it about eXpelling gas, a normal function of the human body, that make so many chuckle? The average person farts ten times a day. That's average. Of course statistically, one could find a range of 287, so to be accurate, wouldn't we need to know the mode and median too? For example, although the mean is ten, maybe most 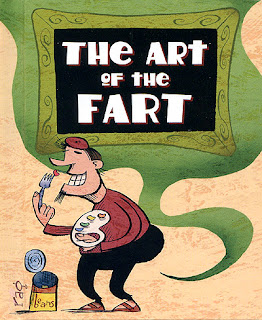 people only fart nine times per day; however, the day of the count, Rush Limbaugh farted 264 times. Would he be considered an outlier or did he mess up the whole dang curve?

Is there an Institute of Fartology? If so, who works there?

"My name is Dr. Jones, and I count farts for a living." I bet he's the life of the party! A real gas if you know what I mean.

Furthermore, do these statistics count dead guys? A friend who's an undertaker told me that dead people constantly eXpel gas; however, this gas doesn't just exit from below. It could sneak out of a joint causing a sudden flip of a wrist or foot twitch. I wonder, does cadaver gas smell better, worse, or the same as living farts? I'll have to ask my friend. It just goes to show, we still have a lot of research to do in this scientific field.

Now counting farts would be a stinky job.

Oh Joyce you are always different - and an eXcellent pun thrown in. I'm going to miss the Challenge but look forward to keeping track of your blogs :)

LOL I find farts hilarious whenever wherever they just crack me up.

Laughing my butt off! So clever, Joyce!

I suspect cadaver farts can't smell any worse than my farts. Yeah, they're pretty bad. I like to blame them on the dogs, though.

I found you from the Think Outside the Blog blog hop and I'm loving you and this blog! I will be finding you on BlogLovin.

You are such a hoot. Leave it to Joyce to write about farts and make a post out of it! Hahahaha!

Farts are fun no doubt about it.

I do think you son summed it best. Love your choice for the letter eX.

This is a real gas. Get it! HA HA! :-D Thanks for stopping by my blog and checking it out!

My mind has been opened. Someone out there counts farts. Thank you for that :)

Found you on the a to z, nice post, see you soon.
#atozchallenge
maggie at expat brazil

I suspect I'd take off running if the dead so much as twitched with me in the room.

I have various grades for farts! ;)

I live with 4 men (husband and 3 sons) so I can assure you the Institute of Fartology is alive and well and based in my home. Sigh.

My husband farts like every fifteen minutes and right after he eats anything.

My hubby and boys think pulling each other's finger is the BEST thing ever.

My little girls find this topic hysterical and it doesn't help that my husband is a jokester many times. And as for a cadaver, I never thought about it quite that way, lol!!

I think the job should be assigned to a bunch of adolescent kids - can you imagine how much fun they would have?!

In each one of us is a little kid who still laughs at fart jokes! Brilliant post :)

Dead people do indeed expel gas, and moan and other things. It's eerie in the middle of the night and your tagging a dead body.

I believe men find farting far more entertaining than we gals do. 264 farts in one day. I'd be exhausted.

Have a terrific Silly Sunday. ☺

Stopping by from Silly Sunday.... I don't know whether to laugh or be offended ......

caught ya from Smile with us Monday early.. but this mad me have a good belly laugh, luckily I don't eXpel easily! LMBO! Thanks~ Corey
www.coreycreativecorner.blogspot.com

My husband would get a kick out of reading this and try to explain why he has to let one go every now and then.

My daughter is just shy of two and she finds farting hilarious, so I guess she has something in common with your 8th grader!

LOL!!! I don't think I could be a fart counter, because I have a strong gag reflex. :)

This was hilarious! I loved the "a real gas" comment.

Maybe I am the most immature person alive, but I will ALWAYS laugh at a fart.

I shudder to think of the times a day people eX-pell during the day. I would venture to guess this is a first in the history of A-Z for the use of X.