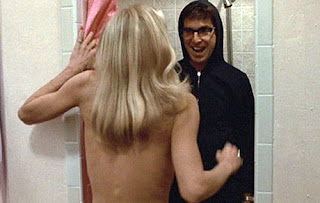 I love the unexpected in film, whether it's a nerd in the shower or finding a golden ticket in a Wonka Bar. These are the little things that make movies worth watching because who wants to see the expected? 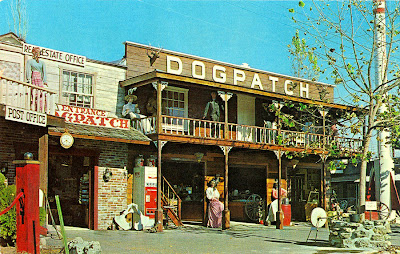 As a youngster, my family visited a quaint little park called Dog Patch USA, located in the Missouri Ozarks. This closed theme park was based on the L'il Abner comic strip and had a cute hillbilly charm about it. I don't remember much at my young age, but I'll never forget the unexpected when opening the door to the men's restroom. I would have used the ladies' room, but a sign told me it was out of order. When I opened the door, a deep voiced man sitting on the pot screamed, "Close the dang door! Doesn't anyone have any decency around here?" Turns out the unexpected man was a statue with a taped message sure to scare the pee out of anyone looking for a restroom. So Dogpatch! 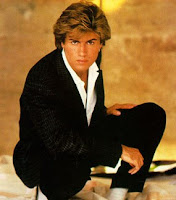 Years later, I remember the unexpected in college. I don't know why the full length poster of George Michael hanging in my room was unexpected because I'm the one who taped it to the dang wall to begin with; however, he scared the begeeze out of me when I spied him standing over my bed in the middle of the night. Little did I know back in the eighties, that handsome man star would have been more interested in my husband than me. Double unexpected. 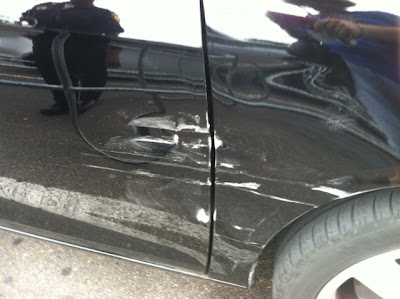 Now-a-days, the unexpected usually means something bad like the handle falling off the microwave, a tick on the dog, or most recently, a 95 year old man smashing my car door while I shopped inside the target. It's not a good sign to hear over the store speaker, "Will the owner of a black, Volkswagon convertible please come to the service desk?"

It's been two weeks and we're still driving the rental car and waiting for the repairs to be complete. Should it be expected to be without my car for so long? I don't think so. Unexpected was fun as a kid. Now, not so much.

Nice that the guy at least reported the accident, and didn't just drive away like a lot of people would have.

I usually love the unexpected, unless it inconveniences me...although those moments may teach me something.

I hope you get your car back soon.

Holy crap, that man on the toilet bit would have scarred me for life. I'd always be slowly pushing stall doors open after that!

Sorry your got our car smashed up. At least he had the decency to find the owner. I posted last month about some jerk how hit our car then parked a few spaces away hoping not to get caught. That was a crappy unexpected surprise to come out to, for sure!

Yeah. I can see that.

Wow! He really nailed your car!

Crikey! The guy on the toilet, now that sounds traumatic!
Hope your car is restored to its former glory a.s.a.p.
George Michael - now that was an unexpected shocker!

cars... expected to be unexpectedly predictable.... :)

Ahhh, I sitll LOVE George Michael. He's on my Pandora. And makes me feel young again. Just like that, back in the 80s! I would welcome him hovering over my bed! (Though I didn't know he might prefer my husband. How did I not know that? Is that true??)

That guy on the toilet would have scared the piss out of me. I think you are right, the unexpected can be a lot less fun when you get older!

The guy on the toilet! Scary! I would have peed right in that spot

Funny thing, but your unexpected is nothing like mine! lol I usually find the unexpected leads to good things, if not immediately.
I did enjoy the vision of you opening that stall!!! rotf
The car,,,well, that's inconvenient, but it's a 'thing' and nothing more.

Hahaha! George Michael. Who would have thought? :)

Great post! I like George Michael's music! Who would've thunk it! Sorry, about your bug! Somehow, I can imagine you driving that car. You gotta' park a mile away these days in the parking lot if you don't want those dings. One guy dinged my new Land Cruiser pretty bad, left a note with a bogus telephone number. Why did he even leave the dang note? Probably, someone was watching him.....

Your experience at the theme park restroom reminded me of a time in the Denver airport restroom wit maybe 20 of us lied up at the urinals when unexpectedly you could hear the distinctive sounds of high heels clicking in the floor...

WOW i just wrote alot and it bounced me out saying i wasn't logged into my wordpress and something about phishing :( so maybe it ended up in your spam comments. Hohum so i will attempt one more time and end by saying THANK GOODNESS you didn't get HURT! ((hugs))