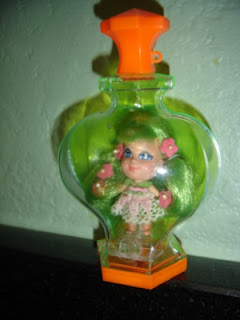 I once was the proud owner of a Liddle Kiddle doll named Apple Blossom. Her flower-covered green hair flowed over her two inch body as she populated the stores sometime around 1967--which means I must have been negative fifteen years old when I got my treasure. Not only was Apple the most beautiful doll I ever owned, but also, when locked inside her container, she carried a fresh perfume scent that stuck around well into my adulthood. 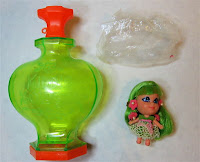 So at age -15, I made a decision. Apple Blossom was too special to be just any doll. I kept her perched in her bottle on top of my dresser. Sure, I played with her. She was the captured princess who couldn't escape her cage. Every so often, I'd open her, take a whiff, stroke her soft hair, and wrap her back in plastic. But I was sure to keep her in mint condition because I knew one day I'd have a daughter and I'd give her this special doll.

The years flew by and sure enough I became a mom. My daughter bubbled when I gave her that amazing doll. Then on that very same day, she lost it.
Posted by Catch My Words at 9:25 PM

omg I used to have one with pink hair and loved her. The only doll I liked as I was tomboy, well that and my cabbage patch kid which more my friend than my doll LOL

I'm surprised you had one because you're younger. Every little girl of the sixties had some kind of Liddle Kiddle doll, but she eventually disappeared. Did you also have the one with the plastic stick hanging out of her back so she could walk?