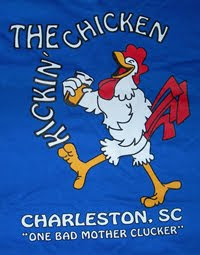 I just got back from visiting my son in Charleston and getting a first hand peek at what twenty-somethings do for fun. Every Wednesday at 10:00 is Trivia Night at the Kickin' Chicken. I was all over it. Perched on stools around a wooden table we delighted in competing for a $50 bar tab for the winners, $25 for second, $10 for third, and the dreaded syphilis infection for fourth. Competing against a large crowd, we left empty handed; but our team had full beer bellies.

The first task was picking a team name that related to current events, was totally obscene, or preferably both. My son, daughter, and I struggled over a name, but it took my son's twenty-three year old friends no time to come up with the kind of name with words that one would never say in front of someone's mother (AKA - me). I didn't mind the sexual names so much, but Charlie Sheen jokes got old, and Japanese related titles were just plain rude. My favorite team name was: "I don't bungee jump because broken rubber brought me into this world and I don't want to leave the same way."

Equipped with the rare knowledge that Michael J. Fox's middle name is "Andrew," we were ready to begin. . . but they didn't ask that question. Being the night before St. Patrick's Day, a lot of questions related to the Irish. No problem; I've been to Ireland. So why did I report the most southern county as being Limerick instead of Cork? Oh, the pressure!

We knew Sam Houston was the governor of Texas who retired from office rather than take the oath of allegiance to the confederacy (although we almost said, "George Bush"); Florida was the most recent college team to win two championships in consecutive years; and never remove the Cauliflower Ear during a game of Operation. 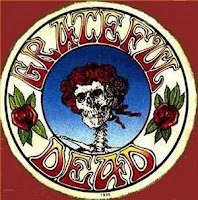 What we didn't know were the four most popular bands of all times. Beatles and Rolling Stones were the given. What were the two others? Being the old lady who loves to tune into classic rock, how could I have missed it? I was probably the only one in the bar who had been around during these bands' hey days. So, knowing what I know, how could the Grateful Dead not be one of the four? I mean, "dead heads" abound, even though no one understands why a dead person would be grateful. Anyway, I know you're dying for the correct answer . . . the winners were . . . wait for it . . . Led Zeppelin and U2. Really? Yeah!

Although Trivia Night is a blast, it's made for the young. To find out why, reread my second line: "Wednesday nights at 10:00." How could someone over twenty-five get up for work the next day?
Posted by Catch My Words at 7:37 PM

No doubt--Wednesday night at 10:00. :) But I love the name of the restaurant Kickin-Chicken. This was a great post. :)

Glad you linked up! Though the "resurrection" works best if you REpost this as a new post on your home page, and with the code so your followers can link up too. Right now it's still in the archives.

Seems like you had double fun --hanging out with your son and playing trivia.

How fun! I have a group of friends who have recently started going to pub trivia nights - maybe I'll join them one day!

How fun! Can I join you next time?