Facts About a Dangerous Chemical

The dangerous chemical dihydrogen monoxide needs to be banned, and here is why:

1.  It can be chemically synthesized by burning rocket fuel.

2.  Over consumption can cause excessive sweating, urination, and even death.

3.  One-hundred percent of all serial killers, rapist, and drug dealers have ingested this chemical.

4.  It contains one of the primary ingredients in herbicides and pesticides.

5.  It is the leading cause of drowning.

6.  One-hundred percent of people exposed to this substance will die.

The facts speak for themselves, it's time to ban dihydrogen monoxide! 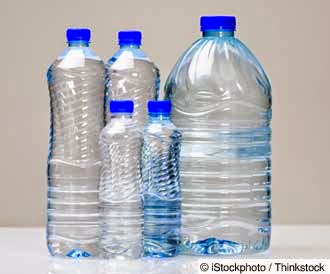 Year's ago, we took the Swaz on a float trip down a Tennessee river. Our large golden retriever "enjoyed" a day which probably haunted him into old age. First, we paddled through floating grass, but the dog thought it was the real thing as he stepped out of the canoe and dove head first under water. We struggled to pull the front end of this massive beast out of the river because his back legs were lodged in the boat, and he'd drown without our help. That was our warm up.

Later, we tipped in rapids that left us in panic once we brought our heads to the surface. Swaz was nowhere to be seen. Finally, my husband lifted the canoe to find our baby paddling underneath it. Upon seeing Mitchell, Swaz panicked as he climbed on top of Mitchell's shoulders continually trying to get higher out of the water. We should have charged admission to laughing observers on shore. If you decide to take your dog floating, beware.

If you were to replace the most expensive item in your house, what would it be? For us, it's that sixty inch mega giant television in our family room that has just bit the dust. We saw its demise coming with its occasional popping sound before the screen would go blank. 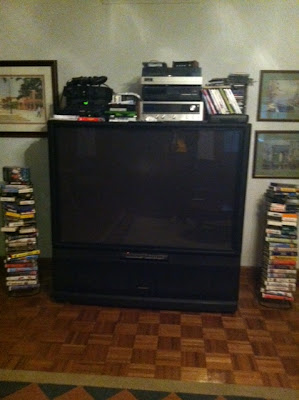 We interrupt this program for an important news announcement **POP**
or
Detective, we've just figured out who killed Isadore, it was **POP**
Now everytime we turn on the TV, we hear one jar of mus- **POP** or guilt- **POP** In other words, the television broke, and we will be broke too once we purchase a new one. If you've TV shopped recently, you understand this concept.

Last night, we ventured into Best Buys and found a very helpful and very pieced saleslady. Okay, I exaggerate, but she did have the rod through the cartridge, a knob on the tongue, and a few empty holes that probably no one but the earring Nazi (me) noticed. The store walls were covered with flat screens, Plasmas, High Def, LED, 3D, and of course the bibbity-bobbity-boo-I-don't-know-what-to-do type. Long gone are the days of just picking up a box.

Now with a new TV comes the question of what to do with the old one. After all, this gigantic piece stands to my chin but thank God, it's much wider. Erica, my beautiful and brilliant youngest child wants to turn the television box into a gigantic fish tank! We'd clean out the insides, fill it with water, and have sixty inches of aquarium.

Interesting idea because this is not the first time this box has held life. Years ago, a brown recluse got trapped behind the glass. We enjoyed watching her crawl over the face of the annoying Head On lady with her repetitive commercial designed to give us a headache so we'd buy her product. Finally, our friend turned to dust and we can still see her shriveled corpse on the bottom ledge. *sniff*

Interesting idea about the fish, Erica, but no. Instead, I've placed a fun fish tank at the bottom of this blog. Move the arrow, and my fish will follow. Click the mouse and food will drop! Have fun kiddies, and we're off to look at more high tech TVs.
Posted by Catch My Words at 7:23 AM 7 comments: