#WW The Dogs at the Bank

We pulled into the line for the drive-up teller at the bank.
The dogs went into attack mode–
barking and growling at three dogs in the mirror. 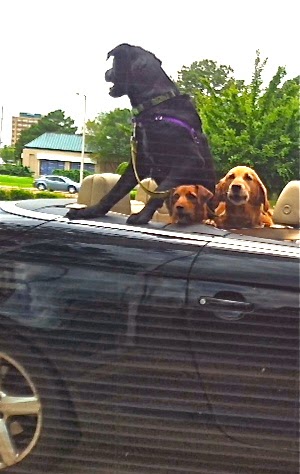 Posted by Catch My Words at 4:50 PM 34 comments: Links to this post 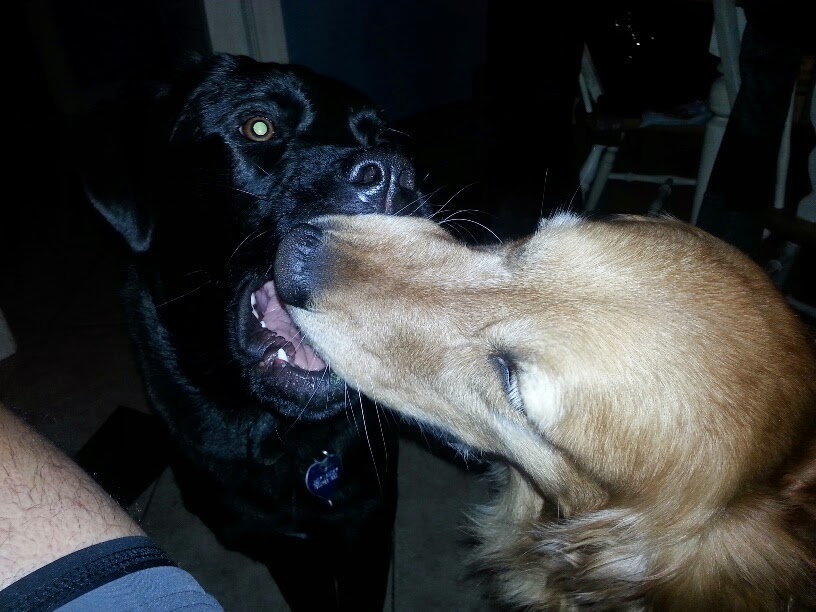 Posted by Catch My Words at 5:06 PM 42 comments: Links to this post

My son took a shower with three beautiful redheads while a black guy watched. 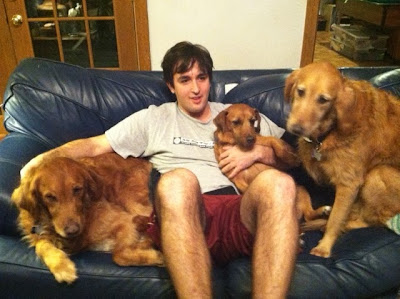 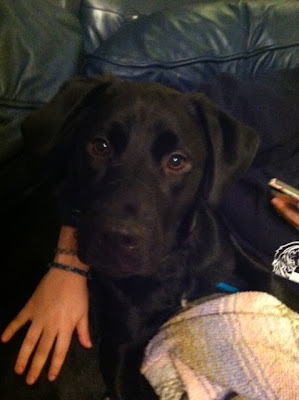 And you think you had a bad day?

We had a feast after the fast. 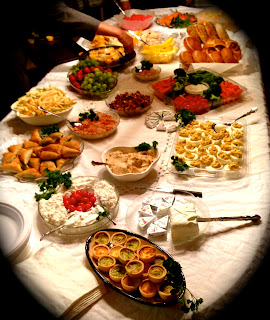 But, someone ate our leftover bagels. 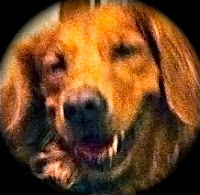 #1 Suspect
and
Her Accomplices 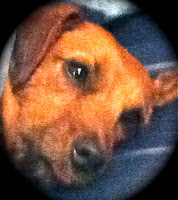 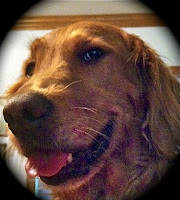 I have a new grand dog!

A real lady never shows all.

The "lady" below was pregnant at age one. 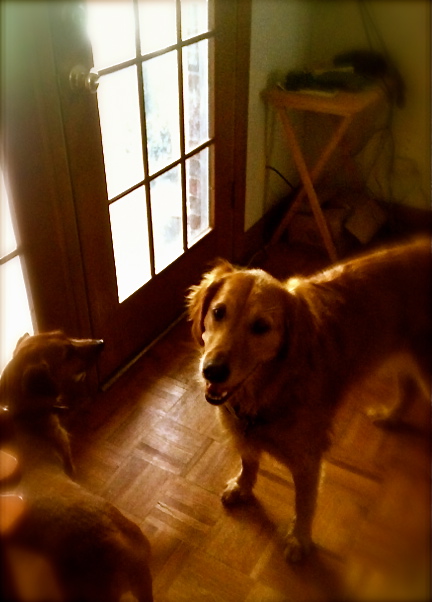 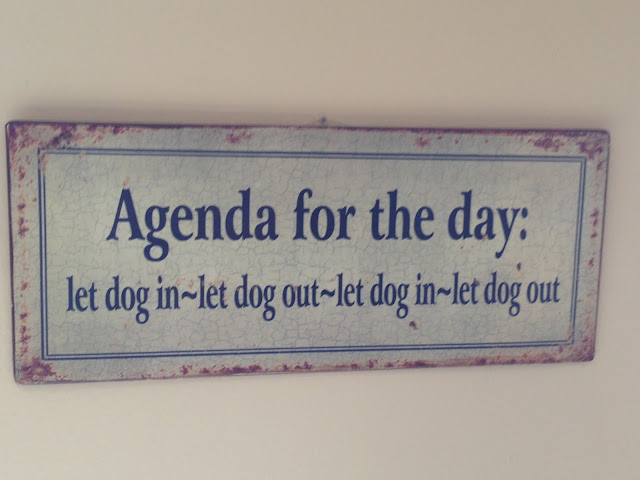 Year's ago, we took the Swaz on a float trip down a Tennessee river. Our large golden retriever "enjoyed" a day which probably haunted him into old age. First, we paddled through floating grass, but the dog thought it was the real thing as he stepped out of the canoe and dove head first under water. We struggled to pull the front end of this massive beast out of the river because his back legs were lodged in the boat, and he'd drown without our help. That was our warm up.

Later, we tipped in rapids that left us in panic once we brought our heads to the surface. Swaz was nowhere to be seen. Finally, my husband lifted the canoe to find our baby paddling underneath it. Upon seeing Mitchell, Swaz panicked as he climbed on top of Mitchell's shoulders continually trying to get higher out of the water. We should have charged admission to laughing observers on shore. If you decide to take your dog floating, beware.

Wordless Wednesday: Who Done It?

We left our jar of sunflower seeds on our kitchen countertop with the lid securely fastened; however, when we got home, we found the jar empty. 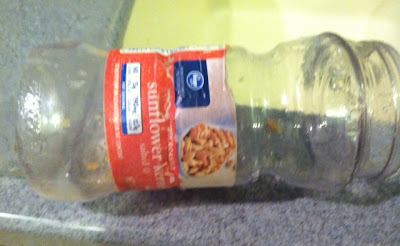 The teeth-mark covered lid was close to the empty jar. 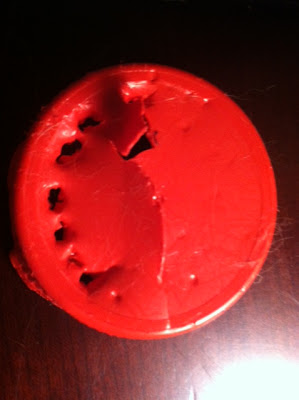 We have three suspects to this crime.
Suspect #1. Honey Bear
Our four year old golden retriever who has never done anything wrong in our years together.
Suspect #2 Millie
Although six year old Millie likes to chew, she is a bit vertically challenged when it comes to countertops.
The red top did not fit in Millie's little mouth.
Suspect #3. Ruby (The Logo Dog) 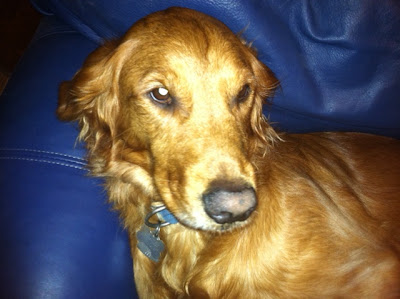 Five-year-old Ruby has a long history of multiple crimes. Her favorite chew toys consist of underwear and Millie. This crazy granddog came to stay with us last month because her master is in the process of moving to Nashville. When the dogs were asked about the crime, Ruby was the lone ducker.
So I ask you Dear Readers, who done it?

Posted by Catch My Words at 6:28 PM 35 comments: Links to this post

If only they'd let me play football.

Posted by Catch My Words at 3:54 PM 42 comments: Links to this post

When I was a wee little girl, I ate two things: hot dogs and jello. The hot dogs had to be peeled of skin and cut into little round pieces while the jello was usually red.

My frantic mother rushed me to the doctor and asked, "What do I do?"

"Feed her hot dogs and jello," the doctor said.

(Reminds me of the old joke, "Doc, it hurts when I do this!"

So Mom left me alone and with little fanfare, my food jag slipped away. Today there are very few foods I don't like. Don't get me wrong, there are many things I won't eat, but it's due to diet, health, or religious issues, not from stamping my feet like a two year old. 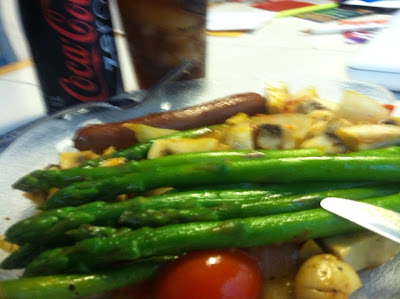 I still love hot dogs (even after the events from my A-Z hot dog post). Here is a picture of my lunch. Yes. That's a hot dog hiding behind asparagus, mushrooms, onions, and tomatoes. I count carbs, so you're not seeing a slice of bread, but I did eat a delicious 13 carb fiber brownie for dessert.  The vegetables are about 5 carbs per serving, and I probably have at least four servings on the plate, so I think I'm good. If not, I will instantly balloon out and have to throw out the few things that didn't shrink in my hot closet, but that's okay too because my kids have directions via Rita Rudner.

They've grown up hearing, "If I'm ever on life support, don't pull the plug until I'm a size six."

"Yes, Mother." They roll their eyes and never find me even slightly funny.

Back to the carbs. I started counting carbs in April and since then I've shed about twenty pounds. I don't eat much in the way of sugar, but that's nothing new. The thought of a glazed donut makes me want to gag, which is ironic because my WIP is a story called MRS. ZIMMERMAN'S DONUTS and involves a little boy who's deprived of these and other delectables from his over protective mother.

I don't eat pork as a poor attempt to follow at least one kosher law. If I were truly a good Jew, I'd give up my favorite traif, shrimp, but it ain't happening. At least not outside the home.

I like wine, but every time I drink a glass, my blood sugar spikes. I'm not a Diabetic but the disease runs heavily in my family and that's the main reason I'm carb counting. I have a pre-Diabetic diagnosis and don't want to take it any further than that, so I figure I have a choice: Eat healthy and lose weight or get the disease and lose the weight of a leg or two. I choose the former. Yay! Blood sugar was 93 this morning.

As for foods I don't like, I hate liver, olives, sweet pickles and relish. I'm not a big fan of okra, but it has more to due with the slimy texture than the taste. It looks like snot and doesn't score too well on my appetizing meter.

Now that you know my food issues, I leave you with a musical number on the topic. Signing off from the Methodist Germantown Hospital. Surgery was a success, and I'm going home today. I hope the dogs don't attack me when I head through the door.

Enjoy one of my favorite songs about a yummy food that I won't be eating for awhile.
Posted by Catch My Words at 7:00 PM 8 comments: Links to this post

Twenty-six years ago this month, my husband and I honeymooned in Bermuda, where we ordered drinks and dinner at The Swizzle Inn. With the typical sunny skies, a fabulous island breeze, and mild temperatures, we sat outside under that green awning in the picture above. The 'Swizzle Inn' sign dangled from a chain straight ahead of me while I sipped a tasty golden-colored Bermuda rum swizzle.

Our dinner conversation bubbled with the excitement of the golden retriever puppy we'd be meeting as soon as we returned home to Memphis. But most of all, we puzzled over what to name him. It took a flash of inspiration to glance at the sign and know that Swizzle would soon become our first born son.
We first met Swizzle at our mayor's son's home after answering an ad in the newspaper. We hopped into the red Jeep and drove the short distance to have the ultimate dog picking experience. Experienced dog owners know to choose the precious fur ball who's asleep in the corner. However, while in our young twenties, we never got that memo. The dog owners led us outside to where the litter had been kept. In fact, they stayed outside so much, that going to the bathroom in the grass was all they knew. Instantly house broken! Of course with smart dogs like golden retrievers, the house breaking routine is never too difficult.


As the litter of golden delights romped through the yard with enough energy to power a house if we could only learn to harness it, we checked them out.

Each fluffy baby radiated with young life and breathed tuna fish scented breath as they darted by. With so much cuteness in one yard, it was tough knowing which puppy to choose. As a result, I did what any young crazy person would do. I plopped onto the ground and waited a nano second to see who'd stop by to meet me. Big mistake! Within moments, I was covered in wet kisses and muddy paw prints all down my red-collared shirt. Never had I felt so loved as I did sitting Indian style on the patio of the dog owners back yard.
Although all the babies were cute–what golden pup isn't?–Swizzle was the energetic little guy who consistently made it to the center of my lap and close to my heart. He'd hop over all his brothers and sisters to make sure I noticed his presence and make him our very own.

We took the pup home, nurtured him with plenty of love, and watched him grow into a handsome stud dog.
After twelve years of joy, we lost our beloved Swizzle, but his memory lives on forever. We've even nailed his dog charm to his favorite spot by the stairwell.
Swizzle's photograph was hung in The Swizzle Inn in Bermuda along with many other photographs from fans of the restaurant. Hopefully, it's still there.
This post written in partnership with Dog Fence DIY and their team of dog containment system specialists. The DIY team seeks to engage dog owners and promote positive and safe dog safety practices. Please visit our sponsor at http://www.dogfencediy.com

Posted by Catch My Words at 9:16 PM 13 comments: Links to this post